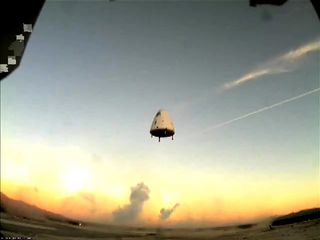 NASA has tapped four private companies to receive grants totaling $269.3 million to spur the development of new commercial spaceships and rockets capable of launching astronauts on trips to the International Space Station.

The announcement today (April 18) concerned the second round of funding awards for NASA's Commercial Crew Development (CCDev) program, which aims to stimulate growth within the private sector to develop and demonstrate viable human spaceflight capabilities. The Space Act Agreements between NASA and the four companies will begin this month and run until May 2012. [The Best Spaceships of All Time]

Of the winning companies:

NASA's CCDev efforts are part of the agency's transition to commercial services following the end of the space shuttle program later this year. After the shuttles stop flying, NASA will rely first on Russian spacecraft, and then on private companies, to carry humans to the International Space Station.

The agency's investment in commercial crew development is an attempt to close the gap in human spaceflight following the retirement of the shuttles.

"We're committed to safely transporting U.S. astronauts on American-made spacecraft and ending the outsourcing of this work to foreign governments," NASA Administrator Charles Bolden said in a statement. "These agreements are significant milestones in NASA's plans to take advantage of American ingenuity to get to low-Earth orbit, so we can concentrate our resources on deep space exploration."

The program's second-round awards will be used to mature the companies' commercial crew space transportation system concepts, and further the design and development of the proposed spacecraft and launch vehicles. [Infographic: Spaceships of the World]

NASA is hoping to be able to fly commercial vehicles sometime in the middle of the decade, but the timeline will ultimately be determined by the maturity of the systems and the safety of the vehicle.

"It's safety that's going to drive when we're ready to fly," said Ed Mango, program manager of the commercial crew program at NASA's Kennedy Space Center in Florida, in a news briefing today. "That will be our highest priority in terms of schedule."

Stiff competition in the private industry

NASA received 22 proposals from the private industry for the second round of CCDev awards, said Phil McAlister, acting director of commercial spaceflight development at NASA Headquarters in Washington, D.C.

"This was a very competitive selection," McAlister said. "We were very impressed with the quality of the proposals we received. Now that the selections have been made, the focus will shift on executing the Space Act Agreements."

Companies who did not receive NASA funding today are still encouraged to continue development on their systems, McAlister said, and the agency's next round of awards will again be opened to a new round of proposals.

The CCDev program began in 2009, and $50 million in first round awards were given to Boeing, Sierra Nevada, Blue Origin, United Launch Alliance and Sierra Nevada.

SpaceX and Orbital Sciences Corp. already have separate contracts with NASA to conduct cargo supply flights to the space station following the retirement of the orbiter fleet.