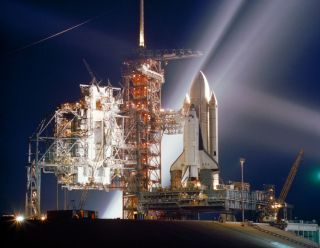 The space shuttle Columbia, NASA's first orbiter, is showered with lights in this nocturnal scene at Launch Pad 39A at the Kennedy Space Center in Cape Canaveral, Fla., during preparations for the first flight (STS-1) of NASA's new reusable spacecraft system. This photo was taken in March 1981 ahead of Columbia's April 12, 1981 launch.
(Image: © NASA)

The NASA contractor responsible for most of the work of maintaining the space shuttles announced Friday (April 15) that it will have to lay off almost 50 percent of its employees – up to 2,800 workers – after the shuttle program shuts down this year.

The layoffs were already anticipated as a consequence of the looming end of NASA's shuttle program, which has only two more scheduled missions before the orbiter fleet is retired. The shuttle Endeavour is slated to lift off on its final flight April 29, and Atlantis is planned to follow on June 28. [The Most Memorable Shuttle Missions]

The contractor, United Space Alliance, plans to reduce its workforce following that last launch. USA anticipates laying off between 2,600 to 2,800 of its total of 5,600 employees in late July and early August "due to the completion of tasks related to day-to-day operations of the Shuttle fleet," according to a USA statement.

The majority of the company's employees work in Florida, in or near NASA's Kennedy Space Center in Cape Canaveral, but USA also has divisions in Texas and Alabama, near other NASA centers. The layoffs will affect all sites.

"The accomplishments of this team are unmatched in human spaceflight," said Virginia Barnes, USA president and chief executive officer. "It will be difficult to say goodbye to such tremendously talented and dedicated teammates, and we are committed to making this transition as smooth as possible for them."

NASA has been planning to retire its space shuttles since as far back as 2004. The decision to retire the shuttles was made by the administration of President George W. Bush following the 2003 Columbia shuttle disaster.

Once the shuttle program draws to a close, NASA plans to focus on developing a more powerful rocket to carry humans to an asteroid and Mars.

While the layoffs don't come as a surprise, NASA's space shuttle program manager John Shannon said they are still difficult.

"They're just a unique team," he said of the shuttle workforce, speaking at a press conference in March. "This is more than a job to them.They're totally dedicated to supporting the legacy of the shuttle program and doing it right." [NASA's Space Shuttle Program in Pictures]

He said NASA has tried to help workers transition into related jobs in their field.

"We have done a lot of work making sure we have retention plans in place, there are workforce centers, job fairs," he said.

Although the looming space shuttle retirement is all but certain, USA is working on a long-shot proposal to extend the program by flying the shuttles commercially. The company is putting forward a plan to NASA, but admits its chances of happening are slim, since the space agency has already made definitive retirement plans, including specifying which museums each orbiter will be displayed in after they are grounded.

Ultimately, the company says it's still in the game, regardless of what happens with the shuttles.

"Though USA will be a significantly smaller company after the space shuttle program is completed, we are optimistic about our future," Barnes said. "USA has a great deal to offer in the way of skills, experience and expertise, and we are looking forward to providing our unique capabilities to a wide variety of new and existing customers."