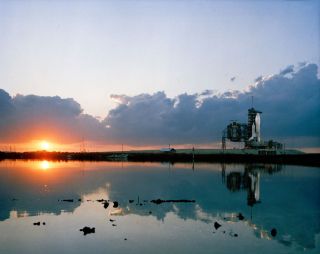 An early morning scene at the Kennedy Space Center's Launch Complex 39, with the space shuttle Columbia in position on Pad 39A at right in March 1981. The shuttle launched into space on April 12, 1981.
(Image: © NASA)

COLORADO SPRINGS, Colo. – While NASA is already planning the particulars of how to retire its space shuttles —– including announcing this week which museums will get to display them — a bid to continue flying the orbiters as a commercial service is still in the works, even if it is considered a long shot, SPACE.com has learned.

United Space Alliance (USA), a prime NASA contractor, is working on a plan to commercially fly the Atlantis and Endeavour space shuttles twice a year following the construction of a new external fuel tank.

The idea was first discussed in February but did not seem to gain much traction. Still, USA is not giving up.

"We're not done yet — we're probably almost done, but we have another shot at it, so we're going to address it one more time," Dan Brandenstein, USA executive vice president and former astronaut, told SPACE.com here at the 27th National Space Symposium.

The notion of flying the space shuttles commercially has been explored by USA in the past, but the impending retirement of the vehicles reopened new urgency for the debate. [NASA's Shuttle Program in Pictures]

"We have, since USA was formed, and in various degrees of enthusiasm, put forth a commercial shuttle proposal, so this is really not anything new," Virginia Barnes, USA president and chief operating officer, told SPACE.com at the meeting. "We're coming upon the retirement of the orbiters, which brings it to the final throes of exploring another alternative commercially. The dynamics of this industry have changed so much, just over the last year, that we dusted off what we had done in the past, and developed a more commercial approach based on today's environment. So we're still pursuing that." [Most Memorable Shuttle Missions]

As things stand now, after the space shuttle program comes to a close, NASA astronauts will need to rely on Russian spacecraft for rides to the International Space Station until new commercial vehicles are ready and able to carry humans into low-Earth orbit. USA's proposal to commercially fly the orbiters is part of an effort to avoid or shorten that gap in the United States' ability to fly humans to space after the final shuttle mission later this year.

"We fill the gap and fly the shuttle five more years until these commercial guys demonstrate that they can, in fact, do it," Brandenstein said.

The plan would also reduce the cost of launching and operating the shuttles by pursuing different investors and customers in addition to NASA, Barnes said. Details of the proposal are still in development, and Barnes said the plan is "just short of being taken to [NASA]."

Even though the NASA chief Charles Bolden revealed the final museum destinations for the orbiters Tuesday (April 12), Barnes is not discouraged. [Poll: Do You Agree With NASA's Shuttle Museum Picks?]

"There's no commitment on time when the orbiters would be moved, and certainly my company expects to be the ones to button them up and prepare them for their museums and for their transportation," Barnes said.

Yet, despite USA's enthusiasm for the idea, it remains unlikely to go forward.

"It's an extremely long shot, but not because of feasibility," Barnes said. "There's a lot of momentum already in the commercial market. A long shot is probably putting it mildly. A 'proposal' is also probably a strong word, let's call it an 'approach.'"

United Space Alliance, a joint venture by Boeing and Lockheed Martin, was founded in 1995, and the company's employees have been the primary workers on NASA's shuttle fleet.