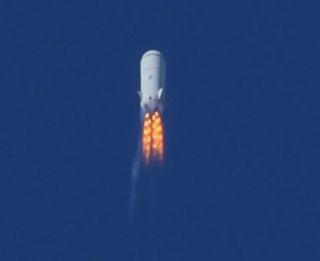 Blue Origin's second test vehicle, a suborbital launch vehicle, soars through Mach 1.2 at 45,000 feet in this image released by the secretive private spaceflight company. This image was taken in August 2011 right before the thrust termination system activated, resulting in the loss of the vehicle, company officials said.
(Image: © Blue Origin)

Blue Origin, the private space group bankrolled by Amazon.com mogul Jeff Bezos, has rolled out a new website, providing a few select new glimpses into the group's past and future.

"We're working to lower the cost of spaceflight so that many people can afford to go and so that we humans can better continue exploring the solar system," proclaimed a message on the company’s overhauled website. "Accomplishing this mission will take time, and we're working on it methodically."

Blue Origin is a secretive  private space company  that has adopted an incremental approach, with each development step building on prior development.

Blue Origin is one of four companies that has received NASA funding to develop commercial space taxis to ferry astronauts to and from low-Earth orbit.

"Research experiments can take sensor readings of space, the sky and the Earth, and will experience high-quality microgravity environments (less than 0.001 g) for three or more minutes," the company's revamped website noted.

The New Shepard system is also being developed to loft astronauts to space on suborbital journeys. That vehicle includes a Crew Capsule carrying three or more astronauts mounted atop a separate rocket-powered Propulsion Module

Following liftoff, the combined vehicles would accelerate for roughly two and a half minutes. The Propulsion Module then shuts off its rocket engines and separates from the Crew Capsule. The Propulsion Module will finish its flight, descend to Earth, and autonomously perform a rocket-powered vertical landing.

The astronaut-toting Crew Capsule would go on to coast to the edge of space. After descent and reentry into Earth’s atmosphere, the Crew Capsule will land under parachutes near the launch site.

In early September, Blue Origin announced that three months earlier they had successfully flown a second test vehicle on a short hop mission. However, a follow-on, more aggressive flight led to loss of the craft at an altitude of 45,000 feet, Bezos said in a statement.

In that communiqué, Bezos explained that a "flight instability" drove an angle of attack that triggered the Blue Origin range safety team to terminate thrust on the vehicle.

"Not the outcome any of us wanted, but we're signed up for this to be hard, and the Blue Origin team is doing an outstanding job. We're already working on our next development vehicle," Bezos reported at the time.

No new details of that failure are provided on the buffed up website. Videos of the successful rocket hop flight soaring to some 550 feet are included on the new website.

According to Federal Aviation Administration records, Blue Origin has launched a steady string of test flights that include:

In April, NASA awarded Blue Origin $22 million in funding under the space agency's Commercial Crew Development  program for development of concepts and technologies to support future human spaceflight operations. That award followed $3.7 million in NASA funding received by Blue Origin in 2010 to develop an astronaut escape system and space capsule for ground tests.

As posted on the new website, Blue Origin's orbital program will use some of the same reusable launch vehicle technologies that are to be pioneered in their suborbital program.

"Conventional first stage booster rockets are expendable. This conventional approach has two major drawbacks. The lack of flight testing prior to first use makes reliability a challenge. The fact that each mammoth vehicle is thrown away after a single use contributes to the staggering cost of spaceflight," the company website stated.

In developing an Orbital Reusable Booster System, the website explains that the booster rocket will loft a biconic Space Vehicle to orbit, carrying astronauts and supplies for adventure, science research, and exploration.

After orbiting the Earth, the Space Vehicle will reenter Earth’s atmosphere to land on the ground under parachutes, and then be reused on future missions to Earth orbit.

"The technical challenges of escaping Earth’s gravity well and reaching orbit have never been trivial, and are compounded when higher reliability and lower cost are required," Blue Origin explained on its website. “We are working patiently, step by step, to reach these long-term goals."

Carried from Blue Origin’s original website to its new version is the group’s motto: "Gradatim Ferociter!" The phrase is Latin for "Step-by-Step, Ferociously."