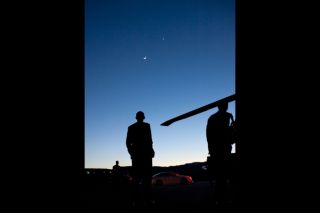 The photo of the president with Venus and the moon was captured Tuesday (April 24) at Buckley Air Force Base in Colorado by White House photographer Pete Souza.

Venus is reaching its peak brightness of the year this week and was joined Tuesday by a crescent moon that resembled a bright smile in the sky as it slid by the bright planet.

"President Barack Obama stops to view the moon and Venus before boarding Marine One in Boulder, Colo., April 24, 2012," the photo's caption states on the White House website, which posted the image Thursday (April 26). [See the photo of Obama, Venus and the moon]

Souza's photo shows the president in silhouette admiring the evening twilight, while the crescent moon and Venus shine bright overhead.

The president took in the Venus-moon sight after what appeared to be a long day of cross-country flights that ended in Colorado.

According to his schedule, the president started the day in the White House East Room honoring finalists for the 2012 National Teacher of the Year award. He then flew to North Carolina to deliver remarks on student loans at the University of North Carolina at Chapel Hill, sat down for an interview with TV's "Late Night with Jimmy Fallon," then left for Colorado.

Venus is currently the brightest star-like object in the night sky and can easily be spotted about 45 minutes after sunset by skywatchers with clear weather. The planet is so bright that it can even be seen in daylight, if you know exactly where to look. In small telescopes, Venus can be seen going through a series of phases similar to those of the moon.

Venus will continue to appear as a dazzling beacon in the evening sky through May 17. By May 21, however, the planet will be setting before the end of evening twilight.

Later this year, Venus will offer an ultra-rare skywatching treat. On June 5 or 6 (depending on your location), Venus will cross the face of the sun as seen from Earth in what astronomers call a transit.

The last time Venus crossed the sun was in 2004, but the Venus transit of 2012 is special: It is the last Venus transit that will be witnessed by anyone alive today. After this year, the next time Venus will cross the sun will be in the year 2117.