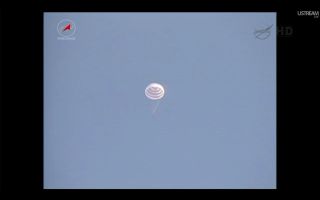 A Russian space capsule touched down on the steppes of Kazakhstan in Central Asia Friday (April 27), safely returning a joint U.S.-Russian crew to Earth after months aboard the International Space Station.

The Soyuz TMA-22 spacecraft landed at 7:45 a.m. EDT (1145 GMT), less than four hours after undocking from the space station. Riding home aboard the space capsule were NASA astronaut Dan Burbank and Russian cosmonauts Anton Shkaplerov and Anatoly Ivanishin, who were reintroduced to the strong tug of Earth's gravity after spending 165 days, or nearly 5 1/2 months, in orbit.

Burbank, Shkaplerov and Ivanishin launched into space in mid-November. The three men formed half of the space station's six-person crew, and their homecoming today brought the outpost's Expedition 30 mission to a close and marked the beginning of Expedition 31.

For Burbank, who commanded the Expedition 30 mission, returning to Earth was bittersweet. He said he loved his time in space but was ready to come home and be with his family again. [Gallery: Space Station's Expedition 30 Mission]

"This has been an amazing experience," Burbank said Wednesday (April 25) during a change-of-command ceremony, shortly before handing control of the orbiting lab over to Expedition 31 cosmonaut Oleg Kononenko.

Burbank also took some time to thank the many people who built the International Space Station (ISS), as well as the mission controllers around the world who watch over him and the other denizens of the $100 billion orbiting outpost.

"It has been an honor and a privilege to be a part of that magnificent team, to be a member of this crew and to be commander of ISS Expedition 30," Burbank said.

The station will have a skeleton crew of three for a few weeks. Kononenko, American astronaut Don Pettit and Dutch spaceflyer Andre Kuipers will have the huge complex to themselves until May 17, when the three remaining members of Expedition 31 are due to come aboard.

However, there should be quite a bit of excitement on the station before those three — NASA's Joe Acaba and Russian cosmonauts Gennady Padalka and Sergei Revin — float through the hatch. The private spaceflight firm SpaceX is due to launch its unmanned Dragon capsule on a demonstration mission to the orbiting lab on May 7 — a first for a commercial spaceship.

The flight is a test run for Dragon and SpaceX's Falcon 9 rocket, to see if they're ready to begin making bona fide cargo missions to the station. SpaceX holds a $1.6 billion NASA contract to make 12 such robotic supply runs, and the first could come later this year if the upcoming demo is successful.

During the mission, Pettit and Kuipers will use the station's huge robotic arm to snag Dragon and help it berth with the orbiting complex. The Expedition 31 crew will offload about 1,150 pounds (521 kilograms) of supplies, then load the capsule up with a roughly equivalent amount of material for the return journey to Earth.

Pettit spent much of Thursday (April 26) preparing items slated to head back down with Dragon, NASA officials said.