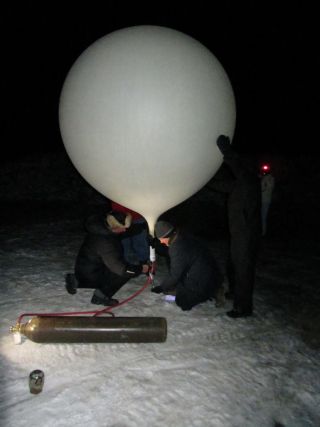 Team members fill the weather balloon with helium early in the morning of April 11, 2012, most of the way up Alaska's Murphy Dome mountain.
(Image: © Mike Wall/SPACE.com)

This story was updated at 11:10 p.m. EDT on June 7 to reflect that all balloons have now been recovered (see below).

Want to tramp around in Alaska's backcountry, do a good deed for science and snag a free high-definition camera at the same time? If so, a team of northern lights researchers has a job for you.

Members of an expedition called Project Aether: Aurora lofted nearly two dozen instrument-laden weather balloons toward central Alaska's dazzling northern lights displays during the first two weeks of April. The researchers were able to retrieve all but six of the fallen payloads before they had to leave Alaska this past weekend.

They want your help in getting those six payloads back, and they're willing to pay for it. If you find one of the balloons, you get to keep the GoPro camera that launched with it — as long as you send in the SD memory card, along with the payload's GPS device.

Retrieving a balloon won't be easy. While all of them were launched from the vicinity of Fairbanks, the remaining six fell back to Earth in rugged and remote areas that the Project Aether: Aurora team didn't have time to get to. [Photo Journal: Alaska Northern Lights Expedition]

Still interested? Expedition leader Ben Longmier, a plasma physicist at the University of Houston and chief research scientist at Ad Astra Rocket Co., gave SPACE.com the go-ahead to publish the latitude and longitude coordinates of the six payloads' current locations:

Payload No. 3, just northwest of Fairbanks, is the team's highest priority, Longmier said, because it was launched into a particularly stunning northern lights show. (This balloon also carried a SPACE.com T-shirt high into Earth's atmosphere, if that sweetens the pot any. If you find the shirt, feel free to keep it — but please send us a photo.)

Payload No. 4 is the second-highest recovery priority. Number 6 doesn't have a camera, but Longmier said he'd provide a GoPro to anyone who returns that payload's GPS device. He also threw a further piece of mystery and intrigue into the mix.

"One of these payloads contains a Le Petit Prince action figure," Longmier told SPACE.com via email. "The person to recover the payload that contains the Le Petit Prince will receive a special GoPro accessories package. Le Petit is a brave explorer, but he is becoming cold, lonely, and waiting in the darkness surrounded by wolves and other wild Alaskan animals. Please bring him back soon!"

To give you a better idea of what you're looking for, Longmier provided a brief description of the fallen balloons.

"They contain a mixture of GPS [equipment], parachutes, PVC, carbon fiber and modified GoPro cameras," he said. "The most notable feature of the payloads is the bright orange and white 36-inch-diameter parachute, and the burst 3- to 4-foot-long white latex balloon."

Project Aether: Aurora modified its GoPro cameras to make them work better in low-light conditions. If you recover a payload but would like a "normal" GoPro, Longmier said he'd exchange with you. In any case, recovery teams should contact him at blongmier@uh.edu for shipping details.

The expedition launched a variety of other instruments along with the cameras in an effort to gain a unique perspective on the northern lights. Project Aether: Aurora also aims to inspire schoolkids all over the world to get more interested in science, technology and math, and ultimately to consider a career in these fields.

The team hopes it captured stunning aurora footage that will help catch students' eyes, and it's working with GoPro to get these images out to the public.