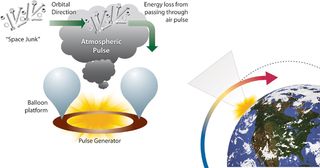 A Space Debris Elimination (SpaDE) initiative would make use of blasts of air from within Earth's atmosphere to take out orbiting debris.
(Image: © Raytheon BBN Technologies)

The problem of menacing space junk has spurred all sorts of ideas to deal with it, from garbage scows and huge nets to laser blasts and debris-snagging Nerf balls.

Now scientists are considering a huff-and-puff approach to remove debris from orbit by firing focused pulses of atmospheric gases into the path of targeted space trash.

That's the idea behind SpaDE, a Space Debris Elimination initiative put forward by Daniel Gregory of Raytheon BBN Technologies in Virginia. Vertical bursts of air produced within Earth's atmosphere can either be directed at orbiting riffraff to change its trajectory or cause drag on the clutter to hasten its re-entry.

The concept is being fleshed out under the NASA Innovative Advanced Concepts (NIAC) program, one of many novel space initiatives that were briefed in Pasadena, Calif., in March at a NIAC symposium.

NIAC is under the wing of NASA's Office of the Chief Technologist, which is geared to foster technology and innovation within the space agency.

Several different methods are being reviewed to create the air bursts that would jet into space. A balloon platform or a high-altitude plane could be tasked for the job, Gregory said. [Gallery: Space Junk Cleanup]

"Our preliminary results show that we can affect the orbits of low-Earth orbit debris. We think we have a viable solution," Gregory said. Whether it's big or small chunks, there's no limitation in what SpaDE could target, he said.

"We can affect many pieces of debris simultaneously, if they are all close together," Gregory added. "Hopefully with less than a 3 percent change in velocity you can de-orbit most low-Earth debris."

An early estimate of how much fuel needs to be detonated to create the atmospheric pulse is roughly equivalent to 500 gallons of gasoline, although the optimal fuel level is still under study.

The air pulses themselves would fall back into the atmosphere, leaving no residual trace in orbit to interfere with low-Earth orbit satellites. "In contrast to other proposed methods, SpaDE is fail-safe, in that it places no solid material in orbit where a malfunction could create new debris," according to a SpaDE fact sheet distributed at the meeting.

Raytheon BBN Technologies is partnered with the University of Michigan to assess SpaDE, Gregory said. "We're just focusing on the viability of the solution. The results are promising," he said.

How much will SpaDE cost?

"We won't know that until we determine exactly how much energy is needed and which fuel is best suited to produce it. Most of the total cost will lie in the cost of energy," Gregory reported.

To move the International Space Station, it does cost on the order of $2 million per burn, Gregory said. "We think we can do this for a whole lot cheaper."