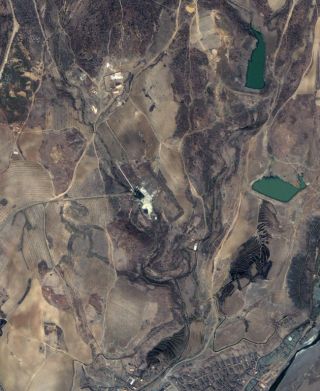 GeoEye’s IKONOS commercial remote sensing spacecraft have maintained an eye on North Korea’s Musudan launch site, in the northeastern part of the country, as seen in this 2001 image.
(Image: © IKONOS satellite image courtesy of GeoEye)

North Korea announced its intention today (March 16) to launch an Earth-watching satellite into orbit next month on a long-range rocket, according to news reports.

The controversial announcement sparked an immediate response from U.S. and South Korean officials, who claim the satellite program is a disguise for military missile testing, according to the Washington Post.

Only 16 days ago, North Korea's new leader Kim Jong Un entered into an agreement with the U.S. to halt long-range launches in exchange for 240,000 metric tons of food to curb the country's widespread famine, reported the Washington Post.

While today's announcement could threaten this agreement, North Korean officials argue that the country's satellite program does not violate nuclear disarmament rules because it is part of a peaceful space program, according to the Associated Press.

"Such a missile launch would pose a threat to regional security and would also be inconsistent with North Korea's recent undertaking to refrain from long-range missile launches," U.S. State Department spokesperson Victoria Nuland said in a statement, according to the Washington Post. "We call on North Korea to adhere to its international obligations, including all relevant U.N. Security Council Resolutions. We are consulting closely with our international partners on next steps."

The launch is scheduled to occur between April 12 and 16 to commemorate the centenary of founder Kim Il Sung's birth, the Washington Post reported. The rocket will launch from North Korea's North Phyongan province, according to state media reports.

In April 2009, North Korea attempted a similar satellite launch that was widely criticized. North Korean officials said the mission succeeded, but U.S. intelligence agencies claimed the vehicle failed during ascent, which caused the rocket's second and third stages and the onboard satellite to plummet into the Pacific Ocean.

The 2009 event triggered the United Nations to tighten sanctions against North Korea, but this latest announcement could carry harsher consequences.

"If North Korea does conduct the launch, it kills the food deal," Dan Pinkston, an expert at the International Crisis Group told the Washington Post. "For the Obama administration, it becomes politically impossible."