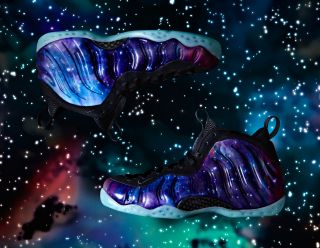 Three icons of professional basketball will don special space-themed sneakers when they take the court for the NBA All-Star Game in Orlando later this month.

LeBron James, Kevin Durant, and Kobe Bryant will wear special edition Nike shoes styled after NASA spacesuits and inspired by astronauts. Their fans will also be able to purchase the same sneakers as well as others designed by Nike to evoke central Florida's association with space exploration.

Graphics on all the shoes "pay homage to the supernova — arguably the most powerful force in the universe," Nike said in a statement, while the sneaker's outsoles glow in the dark and individual 'mission patches' adorn each shoe as a nod to the astronauts' mission badges. [Gallery: Nike's New Space Shoes]

James, who is a player for the Miami Heat, Durant with the Oklahoma City Thunders, and the Los Angeles Lakers' Bryant will compete in the All-Star Game on Sunday, Feb. 26. Nike will release its "Space Exploration" sportswear pack on Feb. 23 and the basketball models on Feb. 25 at select retailers and at NikeStore.com.

Like the spacesuits they are styled after, Nike's sneakers for James, Durant, and Bryant incorporate materials and construction techniques that protect their wearer while still maximizing performance. Each also features a "mission patch" designed by Nike for the basketball players.

James' LeBron 9 employs Nike's Hyperfuse construction, a composite of three different layers of material fused to create "a nearly seamless, one piece upper that sheds considerable weight without sacrificing protection." The shoe also features a Flywire midfoot harness that wraps around the foot to "lock it down."

The space exploration-themed LeBron 9 is decked out in bright orange textures, evoking the "pumpkin" pressure suits worn by space shuttle astronauts for launch and re-entry. James hails from Ohio, home to more U.S. astronauts than any other state.

LeBron's mission patch, sewn onto the sneaker's tongue, shows a lion shooting through space. The lion appears on other LeBron-endorsed Nike sportswear in reference to the company describing him as having the "heart of a lion."

Durant's mission patch features a horse, which Nike says "pays tribute to his reign as 'H-O-R-S-E.' champion." The trick-shot side competition was previously part of the NBA All-Star Weekend's activities.

Bryant's Nike Zoom Kobe VII System has a sock-like fit, which keeps the shoe lightweight by eliminating the need for a traditional tongue and innersleeve. Unlike his fellow players' sneakers, Bryant's substitutes a "supernova" for the spacesuits, featuring "telescopic-inspired imagery" on the upper surfaces of the shoe. A supernova, says Nike, "ironically gives birth to stars."

Bryant's patch, which shows a mamba snake, is sewn on the shoe's heel. Bryant nicknamed himself "The Mamba," after one of the world's deadliest snakes.

Nike's new space sneakers go beyond what the All-Star players will wear during the game. Ahead of the weekend in Orlando, Nike Sportswear is introducing a collection of styles inspired by central Florida's association with space exploration by way of the NASA's Kennedy Space Center in Cape Canaveral.

The pack continues the supernova and spacesuit inspired themes seen on the players' shoes on to the Nike Dunk, Nike Flight One and Nike Foamposite One.

The Nike Dunk features a waxed canvas upper emulating training suit material. A military stencil font is prominently featured on the upper and outsole, while the inner lining features a supernova graphic print.

The Nike Flight One is offered in two colorways, with one featuring glow-in-the-dark details on the sole and midsole spheres. And the Nike Foamposite One showcases an "out-of-this-world galactic print" on its upper surface.

The new basketball and sportswear collections are not the first time Nike has looked toward space exploration and astronauts or inspiration. In January 2010, Nike partnered with Apollo 11 moonwalker Buzz Aldrin to introduce the Rocket Hero Mavrk Mid 2 featuring an upper design based on photos taken by Aldrin while on the moon.