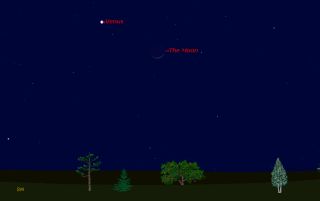 This sky map shows how the planet Venus will appear near the moon on Jan. 25, 2012 at 6 p.m. to observers at mid-northern latitudes.
(Image: © Starry Night Software)

As darkness is falling Wednesday and Thursday evenings (Jan. 25 and 26), be sure to take a look toward the west-southwest part of the sky for yet another beautiful celestial tableau formed by a lovely crescent moon and the brilliant planet Venus, virtually a repeat of their post-Christmas night get together.

On Wednesday, the moon will be about 9 degrees below and to the right of Venus, while on Thursday night, it will have shifted to a position about 7 degrees above and to Venus' right.

These Venus-moon rendezvous occur on roughly a monthly schedule. Indeed, if Venus were stationary and did not appear to move against the starry background, then a Venus-moon encounter would occur every 27 days, 7 hours and 43 minutes. This is called a "sidereal month," which is the length of time it takes the moon to circle the Earth once, using the background stars as a reference point.

Because Venus and the moon were together on the night after Christmas, for instance, we might have expected a return engagement this past Sunday (Jan. 22) if we tried to apply the "sidereal month rule" to this schedule. [Skywatcher Photos of Venus & Moon]

Of course, that rule doesn't work because Venus is not stationary, but moving in its own orbit around the sun. From our earthly viewpoint, Venus in fact has appeared to shift considerably to the east against the background of stars.

So the moon had to travel a little bit extra across the sky to catch up to Venus. Since the moon appears to move across the sky at roughly 13 degrees per day, it needs three more days to catch up to Venus. That takes us to Wednesday evening, where once again we will be treated to an eye-catching sight in our western twilight sky between the two brightest objects in the night sky.

Incidentally, another factor that must also be considered is our own Earth's movement around the sun.

If, in fact, you looked for the crescent moon this past Sunday night, you wouldn't have been able to see it because it was at new phase and hence too near to the sun to be seen. That's because during the 27 days that had elapsed since the previous moon/Venus encounter, the Earth's movement around the sun would have caused the sun's position in the sky to shift to the east as well — in this case, right into the very same region that Venus and the moon occupied on Christmas.

By Wednesday, however, the moon will be well clear of the sun and readily visible in the west-southwest with Venus.

If clouds obscure your view of Venus and the moon on Wednesday and/or Thursday, don't fret. Your next opportunity to see them together again will come on Saturday, Feb. 25.

Editor's note: If you snap an amazing photo of Venus and the moon and would like to share it with SPACE.com, contact managing editor Tariq Malik at tmalik@space.com.