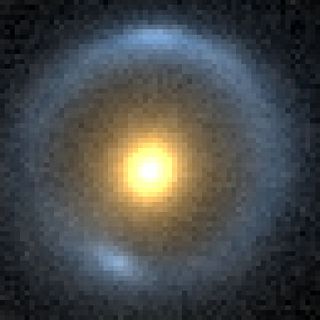 This false-color photo shows an 'Einstein ring,' a visual effect caused by gravitational lensing of a distant galaxy by a massive intervening one. In the case of this system, called B1938, a small invisible dwarf galaxy is adding minor disturbances to the gravitational lensing.
(Image: © Vegetti et al.)

Astronomers have discovered a small galaxy that is invisible to telescopes and may be completely composed of dark matter, which reflects no light.

The newfound galaxy is incredibly distant and extremely small. It orbits as a satellite of a larger galaxy. Though telescopes can't spot the dwarf galaxy, scientists detected its presence through the tiny distortions its gravity causes to light that passes it by.

Scientists think dark matter, which may be made of some exotic particle that doesn't reflect light, makes up about 98 percent of all matter in the universe. Yet it has never been detected directly. Discovering dark objects like this tiny, distant galaxy could help researchers understand better what dark matter is and how it affects regular matter around it.

The new dwarf galaxy is about 7 billion light-years away, meaning its light has taken 7 billion years to reach us here on Earth. It weighs about 190 million times the mass of the sun — a seemingly hefty sum, although typical galaxies pack in the mass of tens of billions of suns. [Images: Peering Back to the Big Bang & Early Universe]

"This is the lowest mass galaxy that we've seen at this distance by far," said study co-author Matthew Auger of the University of California, Santa Barbara.

Even farther away, at about 10 billion light-years, is another galaxy whose light passes by the dark dwarf and its host on its way to Earth. As this light travels through space, it is bent by the gravity of the intervening galaxy and its satellite, causing a distorted, curved picture called an "Einstein ring," after the famous scientist, who predicted such warping effects in his general theory of relativity. This process is called gravitational lensing.

Though most of this warping is caused by the larger gravitational tug of the host galaxy, researchers used a computer model to detect a slight excess of warping caused by the tiny addition of the dwarf satellite's gravity.

"It's a subtle effect that by eye you would tend not to see except from subtracting a model from the data," Auger told SPACE.com.

The astronomers were also helped by extremely high-resolution images taken by the Keck Observatory in Hawaii, using a system called adaptive optics to compensate for atmospheric blurring.

"The image quality in the data we used here is somewhat better than the quality you can get from the Hubble Space Telescope," Auger said.

Auger and his colleagues, led by Simona Vegetti of MIT, reported their finding in the Jan. 19 issue of the journal Nature.

Because it is so far and hard to see, astronomers can't be sure if the newly discovered galaxy really is made almost exclusively of dark matter, or if it just contains stars that are too dim to be visible at this distance.

There is some reason to think that very low-mass dark matter galaxies might exist independent of any visible matter, researchers said. The small clump of dark matter may have originally contained gas that formed stars when it was newborn, but when these stars died and exploded in supernovas, they may have blasted all the remaining gas out into space, leaving the dark matter clump without any material to form new stars.

However, theoretical models aren't clear on this issue, and astronomers would like to know more about when light matter galaxies form, and when dark matter clumps remain starless.

Dwarf galaxies aren't a rarity in the cosmos; even our Milky Way has them. In fact, the newfound galaxy is about the same size as our own galaxy's Sagittarius dwarf satellite.

"For the first time we're getting information about something with a mass that's comparable to some of the smaller Milky Way satellites (like the Fornax and Sagittarius dwarfs) but outside of the local universe," study co-author David Lagattuta of the University of California, Davis, told SPACE.com in an email. "Add in the fact that it's something like 6 or 7 billion light years away, it's really true that we've never been able to see something like this before!"

The Milky Way's satellites are also little understood — they are hard to observe, and theory predicts many more of them than have been discovered. Scientists hope that finding more dwarf galaxies around distant hosts may help shed light on the problem.

"Vegetti and colleagues show convincingly that gravitational lenses allow low-mass satel­lite galaxies to be discovered regardless of how luminous the satellites are," astronomer Robert W. Schmidt of the Universität Heidelberg, in Germany — who was not involved in the research — wrote in an accompanying essay in the same issue of Nature. "As such, they offer the means to refine measurements of the mass function of faraway satellites."