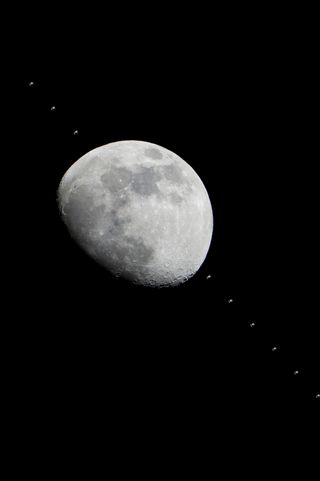 Multiple images of the International Space Station flying over the Houston area have been combined into one composite image to show the progress of the station as it crossed the face of the moon in the early evening of Jan. 4, 2012.
(Image: © NASA)

Two photographers have snapped spectacular portraits of the International Space Station streaking across the night sky, catching the orbiting lab crossing the moon and slipping by Jupiter.

In one series of photos, NASA photographer Lauren Harnett captured images of the moon at the exact moment that the space station passed across its face in what scientists call a "transit."

Harnett took the photos on Wednesday (Jan. 4) from NASA's Johnson Space Center in Houston. She then combined several images into a composite view that shows the space station just before and after it crossed the moon's disk.

"She had to struggle with a window of visibility limited by fog and clouds, and I think she got some excellent results," said NASA spokesman Mike Gentry at the space center. [See the space station and moon photos]

The International Space Station is the largest spacecraft ever built, with a main truss that is longer than a football field.  It is currently home to six men (three Russians, two Americans and a Dutch astronaut) and flies 240 miles (390 kilometers) above Earth at a speed of about 17,500 mph (28,000 kph).

At its brightest, the space station can outshine the planet Venus and be easily spotted with the unaided eye by skywatchers who know where to look.

"The space station can be seen in the night sky with the naked eye, and a pair of field binoculars may reveal some detail of the structural shape of the spacecraft," NASA officials explained in an image description.

In Harnett's photos, the moon appears in crystal-clear detail, and the shape of the space station's huge solar arrays and backbone-like main truss can be recognized.

Harnett was not the only one to photograph the space station this week.

On Thursday (Jan. 5), photographer Mike Killian spotted the space station from central Florida as it passed near the bright planet Jupiter.

The space station "made a six-minute pass over central FL last night," Killian told SPACE.com in an email. "Viewing conditions were perfect."

There are several websites that can help amateur and seasoned skywatchers alike prepare for a night of space station and satellite observing.

Another good site is this one, which provides real-time satellite tracking and shows at any given moment during the day or night where over Earth the space station or shuttle happen to be.

The International Space Station is not the only satellite that can be spotted by the unaided eye. Other bright satellites, such as China's Tiangong 1 space laboratory, can be seen from the Earth without telescopes (as could NASA's space shuttles, before they were retired in 2011).

And seeing satellites from Earth is not a one-time event. The International Space Station, for example, has been orbiting Earth since 1998 and completes one trip around the planet every 90 minutes.

"It's certainly not something that's limited to happening just a few times a year," Gentry said.

Editor's note: If you snapped an amazing photo the space station or any other skywatching sight and would like to share it with SPACE.com, contact managing editor Tariq Malik at tmalik@space.com.