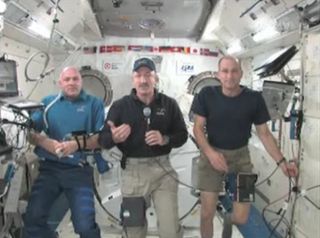 Three astronauts living and working on the International Space Station shed a little light on life in orbit this week during a video interview with SPACE.com.

The three space men answered questions submitted by SPACE.com readers earlier in the week via Facebook and article comments. Here's what they had to say:

SPACE.com: Reader P Edward Murray wrote in to "thank the Commander for sharing that wonderful photo of Comet Lovejoy!" What was it like to see that amazing view of the comet?

Burbank: Clara, it was spectacular.

I think I said this to the first folks at Detroit News just after it happened. It was just one of those cases where I was just lucky to be in a certain position at a certain time. We had just finished a night pass and were coming over Australia, and the sun was about ready to come up, and there was this incredibly bright, dark green glow that was, at least from my perspective, extending up from where the sun was about to emerge above Earth's limb. [Video: Astronaut's Spectacular View of Comet Lovejoy From Space]

At the time I had no idea what it was and I didn't even have the presence of mind to take but just a very quick camera shot that day, and it was the next morning that I realized, and learned from Houston, the specialists there, that it was a comet that wasn't expected to survive a close pass to the sun. And over the next several days we just had some wonderful opportunities to get some great imagery of it.

SPACE.com: Neat! Well, another reader named Will Dean  wrote in to ask "How does microgravity and being in space affect your dreams" while you're sleeping?

Kuipers: Well, so far my dreaming is still like on Earth. In the first days you arrive, you don't sleep that good. I mean, actually you don't want to sleep, it's too exciting to be here. But the dreams themselves didn't change in my case. Maybe the others have other experiences.

Pettit: When I'm on Earth I'll often dream about flying, and now that I'm up here and can fly, I'll be dreaming about walking, and I guess it just shows that even in your dreams there's a certain measure of discontent.

SPACE.com: A reader named Elizabeth Byrne wrote to ask if any of you made "any New Year's resolutions?"

Burbank: It's a great question, and we're just kind of looking at each other. We've been so busy, even through the holidays here, with handover and so forth, that we really hadn't, at least I and André and Don, hadn't really had a chance to make any New Year's resolutions. I guess if we had one to make, it would be to find time to spend a little bit more quality time in the windows in the Cupola and some of the Nadir-facing windows to look at planet Earth from here. [Holidays in Space: An Astronaut Photo Album]

SPACE.com: Brandon Murray asks, "Just how bad is the 'space junk' issue in relation to the safety of the ISS and its crew?"

Kuipers: Space debris is of course an issue in space, but not so much for the station. A lot of the debris is at different altitudes than where the space station is.

And on top of that, a lot of the big pieces are followed by the ground and so if anything is even coming close to us we can even make evasive maneuvers. It's very rare and it's very conservative but it's how we are in a very safe condition here at this altitude.

SPACE.com: And Robert J Carhart asks are there "any job opportunities up there?"

Burbank: We were just saying, I think there's an awful lot of work to do, number one. Whereas a lot of folks would love to fly on space station, would love to be astronauts and cosmonauts, and I would absolutely encourage them to do that — I think the future is very bright right now for young folks that are looking to get into this business — but we need legions of folks on the ground that help design these vehicles and help design and operate a lot of these experiments remotely and are helping to build the next generation of rockets are spaceships to carry us beyond low-Earth orbit.

So I for one am very optimistic about the future, and I think it's a great opportunity for young folks right now to join the force and help us down the road.

SPACE.com: A reader named Jeffrey Dean Root asks what are some examples of the science research on the space station that will help prepare us for manned missions beyond low-Earth orbit?

Pettit: One set of experiments that we're working on are experiments we do on ourselves, they're human experiments, and Andre is a living example of that right now. Where he is covered with little pieces of computer and pumps and things that continuously monitor his blood pressure – it's actually beat to beat blood pressure – and from that you can determine the cardiac work that your heart is putting out for whatever mode of exercise you happen to be doing. So that's one experiment we're doing in terms of the human life studies.

The other things we're doing up here is what I refer to as engineering research. It's mundane things like how to make a toilet that works and how to take your urine that you collect in the toilet and process that and make it back into drinking water. And we're doing that right now on station.

We've got three big chunks of equipment: one's a toilet and one's a processor and he other's a galley and they're all hooked together. And you'll go into the toilet and the machines will whir and wind and grumble and then you'll go ahead and make yourself a bag of coffee. It's the kind of technology we need to have if we're going to go away from planet Earth for long periods of time.

SPACE.com: John Read asks, "given the chance, would you volunteer for a two year mission to Mars?

Burbank: I for one, absolutely.

Kuipers: Yes, me too. I would like to bring my family, though.

SPACE.com: So, we know that the space shuttle is retired by now, but do you anticipate this year will be any less busy on the space station?

Burbank: Well all of us that had the privilege and pleasure to fly on the shuttle all feel a little bit upset that we've lost that great asset, but the fact is that the shuttle's done the thing that it was exquisitely well designed to do, and that is to build a nearly million pound space station in low-Earth orbit.

So in addition to Hubble and many of the other things that it's done, one of the key things that the [shuttle] was unique to do, was to be able to launch huge payloads, bring them up here with an onboard robotic arm and an onboard EVA capabilities, spacewalk capabilities, allow us to build this incredible facility.

Now the job for us is to actually put it to use to answer all these questions so that we can go back to the moon and stay, we can go on to Mars, asteroids and so forth. And space station is, for a lot of the U.S. science, very well designed and very well equipped to do that, but now we've got a very busy road ahead of us between now and 2020, or perhaps as late as 2028, to answer all those questions so we can take the next steps.

SPACE.com: Well thank you all so much, and we wish you safe flying.

Burbank: Clara, thank you. It was a pleasure talking with you today and all the best to you and your readers.