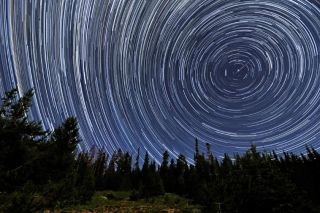 Meteor showers are some of the most popular skywatching events each year, and 2012's lineup of celestial light shows is already expected to be more impressive than last year.

A meteor shower occurs when Earth travels through specks of debris from comets or asteroids. These pieces of dust and debris hit Earth's atmosphere at scorching speeds and disintegrate in flashes of light. This is why meteors are often called "shooting stars," because of the way they streak across the sky.

So, what is the best way to watch a meteor shower?

The key is to have a dark sky. For urban skywatchers, this means getting as far away from dense city centers and light pollution as you can. Ideal conditions for viewing a meteor shower include a clear, unclouded night sky with little to no natural moonlight.

In 2011, several major meteor showers coincided with the full or near-full moon, which meant that the displays were largely outshone by bright moonlight. This year, however, the moon should be more cooperative for meteor shower enthusiasts, NASA officials have said. [2012 Meteor Shower Skywatching Calendar]

Most meteor showers get their name from the constellations from which they appear to streak (though the constellations are not the actual source of the meteors). When we look down this path, we are looking at the so-called radiant.

It's also important to dress appropriately for the occasion, so be sure to bundle up for the cold overnight temperatures. Then, prepare to exercise a little patience. NASA astronomers advise watching for at least half an hour. While some displays can showcase meteors at rates of up to 100 per hour, others will take a little more time. [Top 10 Perseid Meteor Shower Facts]

Another tip is to simply use your naked eyes. When watching a meteor shower, there's no need to use a telescope or binoculars because they will limit the amount of sky you can see at one time. Pick a dark patch of the sky, but don't necessarily fixate on one specific spot.

"Relaxed eyes will quickly zone in on any movement up above, and you'll be able to spot more meteors," NASA officials said in a statement. "Avoid looking at your cell phone or any other light. Both destroy night vision. If you have to look at something on Earth, use a red light. Some flashlights have handy interchangeable filters. If you don't have one of those, you can always paint the clear filter with red fingernail polish."

Here's a handy guide from NASA on the major meteor showers of 2012, including specific tips for each celestial show:

Notes: A waxing gibbous moon will set at about 3 a.m. local time, allowing for several dark-sky hours of observing before dawn. This shower has a very sharp peak, usually only lasting a few hours, and is often obscured by winter weather. The alternate name for the Quadrantids is the Bootids. Constellation Quadrant Murales is now defunct, and the meteors appear to radiate from the modern constellation Bootes.

You can also watch the Quadrantid meteor shower online via this NASA website: http://www.nasa.gov/topics/solarsystem/features/watchtheskies/quadrantids_2012.html

Notes: Moonlight won't be as big a problem as last year, as its waning crescent won't rise until after midnight, and the shower peaks from about 10-11 p.m. local on the night of Aug. 12. [Spectacular Perseid Meteor Shower Photos of 2011]

Notes: With the second-fastest entry velocity of the annual meteor showers, meteors from the Orionids produce yellow and green colors and have been known to produce an odd fireball from time to time.

Notes: The Leonids have not only produced some of the best meteor showers in history, but they have sometimes achieved the status of meteor storm. During a Leonid meteor storm, many thousands of meteors per hour can shoot across the sky. Scientists believe these storms recur in cycles of about 33 years, though the reason is unknown. The last documented Leonid meteor storm occurred in 2002.

Notes: The Geminids are typically one of the best, and most reliable, of the annual meteor showers. This year's peak falls perfectly with a new moon, guaranteeing a dark sky for the show in the nights on either side of the peak date. This shower is considered one of the best opportunities for younger viewers because the show gets going around 9 or 10 p.m.