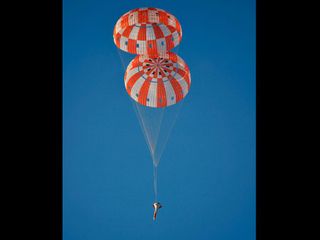 A test article that mimics the Orion spacecraft is seen under parachutes Tuesday, Dec. 20, 2011 as NASA engineers conducted a drop test above Yuma, Ariz. The Orion team was examining how the spacecraft would land under only two parachutes, instead of the normal three.
(Image: © NASA)

NASA tested the parachutes for its next-generation crewed spacecraft last month, as part of a campaign to prepare the capsule for its first orbital flight test in 2014.

A C-130 aircraft dropped a mockup of the Orion Multi-Purpose Crew Vehicle — which is designed to carry astronauts to deep-space destinations — from an altitude of 25,000 feet (7,620 meters) near Yuma, Ariz., on Dec. 20. Engineers conducted the test to see how Orion would land if only two of its main parachutes deployed, rather than the usual three.

The chutes performed well in this failure scenario, NASA officials said. The ersatz Orion hit the desert floor at just less than 22.5 mph (36.2 kph), which is the maximum designed touchdown speed of the capsule.

The new spaceship is based heavily on the Orion capsule concept originally developed for NASA's moon-oriented Constellation program. President Barack Obama cancelled Constellation in 2010, instead directing NASA to work toward getting astronauts to an asteroid by 2025 and then Mars by the mid-2030s.

The gumdrop-shaped Orion is 16.5 feet (5 m) wide at its base and weighs about 23 tons. The space capsule will have a pressurized volume of 690 cubic feet (20 cubic m), with 316 cubic feet (9 cubic m) of habitable space, according to an official description. It's designed to carry four astronauts at a time and return to Earth with splashdowns in the Pacific Ocean off the California coast. [Photos: Orion's Parachute Test]

Orion will blast off the pad atop a giant new rocket called the Space Launch System (SLS). This $10 billion heavy lifter will likely be capable of lofting 70 tons of payload in its early incarnations, but NASA eventually wants to beef it up to carry 130 tons of material to space.

The SLS won't be ready for its first test flight until late 2017, officials have said. NASA wants Orion to make its first unmanned orbital test flight three years earlier than that, so the spacecraft will have to hitch a ride on a different rocket for that trip — likely a Delta 4 Heavy.

NASA hopes the Orion-SLS combo is launching astronauts to deep space by 2021.

With its iconic space shuttle fleet retired, NASA now relies on Russian Soyuz vehicles to ferry its astronauts to and from the International Space Station. The agency is encouraging private spaceflight firms to take over this taxi service, however, and it hopes at least some of them will be ready by 2017 or so.