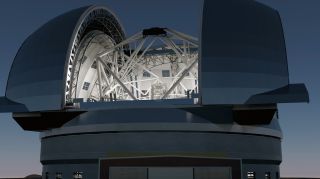 The European Southern Observatory's plan to begin construction of the world's largest telescope — the European Extremely Large Telescope — will take a big step forward in 2012 now that early funding for the project has been secured.

The European Southern Observatory (ESO) governing body approved the 2012 budget, which paves the way for preparatory work to begin at the planned site of the European Extremely Large Telescope (E-ELT) at the Cerro Armazones mountain in the central part of Chile's Atacama Desert.

The telescope, which represents a joint collaboration between 15 countries, will be the world's largest ground-based optical telescope. Builders selected the observatory's location in Chile because of the optimal weather conditions in the area, where skies are clear overhead roughly 320 nights of the year, ESO officials have said.

The ESO governing council's approval of the 2012 budget includes funding for some initial work on the E-ELT project, such as the development of access roads to the telescope site and early construction efforts on one of the telescope's five mirrors. This work is expected to begin in early 2012, ESO officials said in a statement. [Stacking Up the 10 Biggest Telescopes on Earth ]

"The E-ELT is starting to become reality," ESO Director General Tim de Zeeuw said in a statement. "However, with a project of this size it is expected that approval of the extra expenditure will take time. Council at the same time recognizes that preparatory work must start now in order for the project to be ready for a full start of construction in 2012."

The ESO governing body is expected to make a final approval decision for the entire E-ELT project in mid-2012.

Plans for the E-ELT have seen steady progress over the past few months, ESO officials said. In October, ESO reached an agreement with the Chilean government that culminated in support for the project and the donation of land for the mega-observatory.

In that same month, an external review confirmed that the E-ELT could feasibly be built within the proposed budget of about $1.43 billion (1.082 billion Euros). Previous reviews also confirmed that the telescope's design is technically sound, ESO officials said.

Several ESO member states are already financially committed to the project, and funding is expected to be agreed upon between all members by mid-2012, which will enable the council to make its approval decision at that time, ESO officials said.

The E-ELT is expected to be operational early in the next decade, they added.