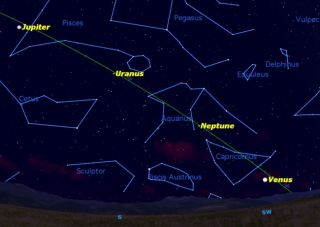 At 5 p.m. tonight, Dec. 21, Venus and Jupiter dominate the sky; Uranus and Neptune are visible between them with a small telescope.
(Image: © Starry Night Software)

This week presents a rare opportunity to see all the major planets of the solar system in a single night.

If you have a telescope, you can find Uranus and Neptune between Venus and Jupiter. The sloping line across the sky that the four planets define is called the ecliptic, because it is the line along which eclipses take place.

The sky maps of the planets available here show where to look to try to spot them this week.

Get up around 6 a.m. local time tomorrow morning, and you can see the rest of the planets. The ecliptic is now sloping in the opposite direction, and along it are arrayed Mercury, the moon, Saturn, and Mars. In the background are three of the brightest stars in the sky: Arcturus, Regulus, and Spica. [Photo Tour of the Solar System's Planets]

Pay particular attention to Spica because, over the next year, the moon will make numerous close passes near Spica, actually passing in front of the star and occulting it on a few occasions. Such close approaches between astronomical objects are called conjunctions. While not of much importance to modern astronomers, they are always interesting to observe.

What makes this event special is that the planets are almost equally spaced around the ecliptic, the only large gap being between Mars and Jupiter, 135 degrees. Your closed fist held at arm's length covers about 10 degrees of the night sky.

The only time you can see both Mars and Jupiter tonight is around midnight. Jupiter will be setting in the west just as Mars is rising in the east.

So, try to get out there tonight and see how many of the planets you can see.

If you're clouded out tonight, keep trying over the next week, as the planets don't move very quickly.

One planet might get overlooked: the Earth. After you've looked at the seven major planets in the sky, don't forget to look down at your feet and see your home planet.

If you snap a stunning photo of the planets tonight and would like to share the experience with SPACE.com, send images or comments to Managing Editor Tariq Malik at: tmalik@space.com.