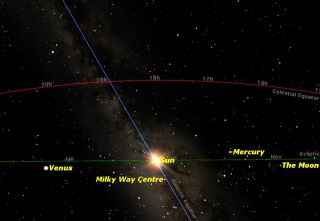 The solstice will occur Thursday, Dec. 22, 2011. On this day, the sun is at its farthest southern declination, and is 6.5 degrees away from the center of the Milky Way.
(Image: © Starry Night Software)

This week, the sun will reach that point where it will appear to shine farthest to the south of the equator,  marking the moment of the winter solstice — the shortest day of 2011 in the Northern Hemisphere.

The winter solstice occurs Thursday at 12:30 a.m. EST (0530 GMT), which corresponds to 9:30 p.m. PST on Wednesday for observers further west. At the time, the sun will be passing over the over the Tropic of Capricorn.

Here's how northern winter solstice works: Since June 20, the altitude of the midday sun has been lowering as its direct rays have been gradually migrating to the south. The sun's altitude above the horizon at noontime is 47 degrees lower now, compared to six months ago. As we often mention, your clenched fist held at arm's length measures roughly 10 degrees, so the sun at midday is now nearly "five fists" lower in the southern sky compared to June 21.

Ancient skywatchers had no understanding of this movement of the sun. They thought this celestial machinery might break down someday, and the sun would continue southward, never to return. As such, the lowering of the sun was cause for fear and wonder.  [10 Skywatching Misconceptions Explained]

Technically, at one minute past the moment of the solstice, the sun has turned around and started north.  It will cross the equator at the vernal equinox, passing into the Northern Hemisphere on March 20, at 1:14 a.m. EDT (or on the calendar date of March 19 for those living in the Mountain and Pacific Time Zones).

When the ancients saw the sun stop and slowly climb to a higher midday location, people rejoiced; here was a promise that spring would return. Most cultures had winter solstice celebrations and some adapted it to other events.

In Persia, the solstice marked the birthday of Mithra, the Sun King. In ancient times, Dec. 25 was the date of the lavish Roman festival of Saturnalia, a sort of bacchanalian thanksgiving. Saturnalia was celebrated around the time of the winter solstice. And in 275 A.D., the Roman Emperor, Aurelian, commemorated a feast day coinciding with the winter solstice: Die Natalis Invicti Solis ("The Birthday of the Unconquered Sun").

Among the many varied customs linked with this special season for thousands of years, the exchanging of gifts is almost universal. Mother Nature herself offers the sky observer in north temperate latitudes the two gifts of longest nights and a sky more transparent than usual.

One reason for the clarity of a winter's night is that cold air cannot hold as much moisture as warm air can. Hence, on many nights in the summer, the warm moisture-laden atmosphere causes the sky to appear hazier.

By day it is a milky, washed-out blue, which in winter becomes a richer, deeper and darker shade of blue.  For observers in northern locations, this only adds more luster to that part of the sky containing the beautiful wintertime constellations.

Indeed, the brilliant stars and constellations that now adorn our evening sky, such as Sirius, Orion, Capella, Taurus and many others is seemingly Nature's holiday decoration to commemorate the winter solstice and enlighten the long cold nights of winter.