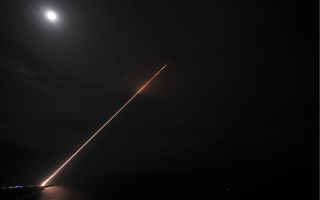 This space wallpaper captures the launch of a Terminal High Altitude Area Defense (THAAD) interceptor from the Pacific Missile Range Facility, Kauai, Hawaii on October 5, 2011. THAAD is a mobile interceptor missile designed to intercept short to medium range ballistic missiles inside or just outside the earth’s atmosphere.