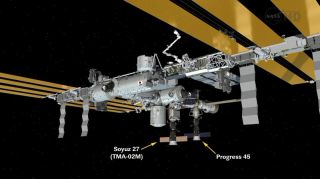 This graphic shows the Progress 45 unmanned cargo ship just after its docking on the Pirs docking compartment at the International Space Station.
(Image: © NASA TV)

An unmanned Russian cargo ship pulled up to the International Space Station today (Nov. 2) carrying tons of fresh supplies for the orbiting lab's three-man crew in the first successfully delivery  mission since an August rocket crash.

The robotic Progress 45 spacecraft docked at the space station at 7:41 a.m. EDT (1141 GMT), ending a three-day trip that began with a smooth Sunday launch from Baikonur Cosmodrome in Kazakhstan atop a Russian-built Soyuz rocket. By coincidence, the cargo ship docked on the 11th anniversary of the arrival of the first space station crew, Expedition 1, in 2000, a mission that began the station's unbroken streak of a continued human presence in space.

The mission is Russia's first successful flight of a Progress cargo ship since an Aug. 24 Soyuz rocket crash that destroyed the Progress 44 cargo ship due to a gas generator malfunction in the rocket's third stage. The Soyuz and Progress 44 spaceship crashed in Siberia, Russian space officials said.

An investigation into the crash found that contamination in a gas generator fuel line or valve was the most likely cause of the crash. The malfunction was a rare failure in Russia's typically dependable Soyuz boosters. [Photos: Russia's Lost Cargo Ship Progress 44]

"After the accident during the launch of a Progress cargo vehicle a couple months ago, there's been some uncertainty in the program," NASA astronaut Mike Fossum said from the space station after the Progress 45's successful launch. "This is a really huge step. This helps clear the rocket of any underlying problems, and so the next Soyuz crew has already gone to Baikonur."

The successful Progress 45 mission paves the way for a planned late-night Nov. 13 launch of three new space station crewmembers aboard a Soyuz rocket similar to that used to launch the robotic Progress spacecraft.  Russia's Federal Space Agency had delayed the launch of the station's new crew to make sure its Soyuz rockets were safe for manned launches.

That delay in regular crew launches forced the space station to drop from its full six-person crew size down to a three-man staff. Space station managers also discussed the possibility of leaving the space station without a crew, if it became necessary.

The station's current crew — NASA astronaut Mike Fossum, Russian cosmonaut Sergei Volkov and Japanese astronaut Satoshi Furukawa —will return to Earth on Nov. 22 after handing control of the orbiting lab over to their replacements riding up on the Nov. 14 Soyuz launch.

Another three-person crew will launch in December, space station officials have said.

The first iPads to fly in space were also delivered to the space station crew by the Russian space freighter.

The next spacecraft to launch toward the space station will be the Soyuz TMA-21 spacecraft carrying NASA astronaut Dan Burbank and Russian cosmonauts Anatoly Ivanishin and Anton Shkaplerov. Liftoff is set for 11:14 p.m. EST on Nov. 13 (0414 GMT on Nov. 14).