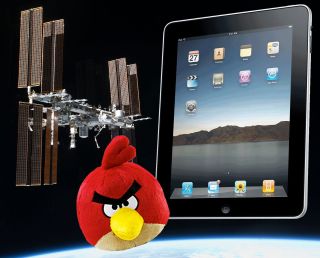 The first Apple iPads in space and an "Angry Birds" plush doll were launched to the International Space Station (ISS) in late 2011.
(Image: © NASA/Apple/Rovio/collectSPACE.com)

Popular tablet computers and the red feathered star of a leading video game played on them are bound for the International Space Station aboard two upcoming Russian space launches.

Two Apple iPads are packed on board the next unmanned resupply vehicle to fly to the space station, set for launch later this month. And a stuffed toy doll of the red bird from Rovio Mobile's "Angry Birds" puzzle game will accompany the next three crewmembers to depart Earth for the ISS next month.

The iPads will augment Apple iPod music players already aboard the station, while the red Angry Bird toy will help by signaling to the launching cosmonauts and NASA astronaut that they have made it to space, when it starts to float.

Entertainment only, for now

"The Russians are flying two iPads on the next Progress. They're going to be used for entertainment purposes only," NASA spokesman Kelly Humphries told collectSPACE.com on Tuesday (Oct. 25).

The next Progress M-13M (45P) launch,  scheduled to lift off Oct. 30 at 6:11 a.m. EDT (1011 GMT) from the Baikonur Cosmodrome in Kazakhstan, will mark the return to flight for the unmanned resupply spacecraft, after the previous vehicle was lost during a launch failure in August.

Should it reach the space station as expected, M-13M will deliver needed propellant, oxygen, water and thousands of pounds of crew equipment, including the two iPads, to the orbiting complex. [9 Weird Things Flown on NASA Space Shuttles]

The tablets will be the first of their type on the International Space Station, which is otherwise equipped with laptop computers, Apple iPods and even an iPhone. NASA is, however, assessing tablets for their possible future use in space.

"The [U.S. operating segment] folks in the station program are taking a look at a number of different tablets and kind of comparing and contrasting them," Humphries said. "They are hoping to be able to fly one or more them next year, but as yet the evaluation is not complete."

There's no word whether the iPads will arrive at the station pre-loaded with Angry Birds, the video game, but the space station crew will only need to wait a couple more weeks to be able to stage their own zero-g version.

"According to the existing tradition, we take with us small charms," Shkaplerov said at a pre-flight press conference in Russia. He explained the custom of flying a toy as a "zero-g indicator."

"This indicator we start on Earth, hung on a string, just behind the door between the landing module and living compartment," he said. "At a time when [we] start weightlessness, about 10 minutes after launch, it will begin to float. So we understand that the start of our flight was a success and we are already in space."

Continuing with custom, Shkaplerov allowed his 5-year-old daughter to choose the toy.

"This little red birdie [was an] interesting fun toy that my daughter liked. She asked me to fly it — and be sure of its return!" Shkaplerov said laughing.

Continue reading at collectSPACE.com about the history of iPads and Angry Birds in space.