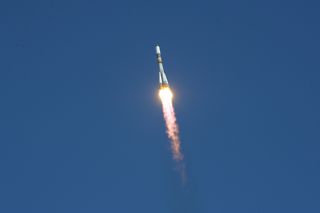 The unmanned Russian cargo ship Progress 45 launches into space atop a Soyuz rocket in a succesful Oct. 30, 2011 launch from Baikonur Cosmodrome in Kazakhstan. It is the first successful Progress launch since a rare crash on Aug. 24.
(Image: © RSC Energia)

An unmanned Russian cargo ship launched toward the International Space Station Sunday (Oct. 30) packed with nearly three tons of supplies for the orbiting lab's crew in what marked the first delivery run to the station since an August rocket crash.

The cargo ship, called Progress 45, lifted off atop a Soyuz rocket at 6:11 a.m. EDT (1011 GMT) from a launch pad at the central Asian spaceport of Baikonur Cosmodrome. It will arrive at the space station early Wednesday.

The launch marks the Russian Federal Space Agency's first mission to the International Space Station since Aug. 24, when a Soyuz rocket carrying another robotic cargo ship — called Progress 44 — suffered a major malfunction minutes after liftoff. The rocket and the Progress 44 cargo ship crashed in Siberia in a rare failure of the normally dependable Russian Soyuz booster.

Because the Soyuz rockets used to launch unmanned Progress cargo ships are similar to those used to launch the Soyuz space capsules that ferry crews to the space station, Russia suspended all missions to the orbiting lab until the source of the rocket cash could be found and fixed. [Photos: Russia's Lost Cargo Ship Progress 44]

A planned Soyuz launch carrying three new crewmembers to the space station in September was delayed to Nov. 14, but only if today's Progress launch was a complete success.

"We congratulate our Russian colleagues on Sunday's successful launch of ISS Progress 45, and the spacecraft is on its way to the International Space Station," NASA's associate administrator for human exploration and operations, Bill Gerstenmaier, said in a statement after today's launch. "Pending the outcome of a series of flight readiness meetings in the coming weeks, this successful flight sets the stage for the next Soyuz launch, planned for mid-November. The December Soyuz mission will restore the space station crew size to six and continue normal crew rotations."

The orbiting lab's crew size also dropped from its full six-person complement down to a three-man crew for longer than planned during the delays. NASA, Russian space officials and other space station partner agencies also discussed the potential of leaving the space station without a crew temporarily until a solution could be found, but NASA officials said earlier this month that such a measure would be unlikely.

An investigation by Russian engineers determined that a low fuel feed to a gas generator in the Soyuz rocket's third-stage engine was the most likely cause of the Progress 44 crash. Some sort of contamination in the fuel line, or a valve, may have caused the issue, the investigation found.

A follow-up review by NASA engineers agreed with the findings.

"They did kind of a background check to make sure that the conclusions the Russians were drawing were reasonable," Bill Gerstenmaier, NASA's associate administrator for human exploration and operations, told members of House Committee on Science, Space and Technology in an Oct. 12 hearing. "We completed that review today within the agency, and we agree with the basic Russian findings."

Today's Soyuz rocket launch is a vital step in resuming flights of astronauts and cosmonauts to the orbiting lab. The station's current three-man crew is made up of astronauts from the United States, Russia and Japan and is due to return to Earth on Nov. 22 after handing control of the orbiting lab over to the new team launching on Nov. 14.

The Progress 45 cargo ship is carrying 2.9 tons of cargo to the space station. The supplies aboard the spacecraft include 1,635 pounds (741 kilograms) of propellant for the space station's thrusters, 110 pounds (nearly 50 kg) of oxygen, 926 pounds (420 kg) of water and 3,108 pounds (1,409 kg) of other gear such as spare parts, maintenance equipment and experiment supplies.

Tucked among all that cargo are the first iPads to fly in space.

Two Apple iPads were packed on the Progress 45 cargo ship by Russian space officials to serve as entertainment tablets for the space station crew. They are the first tablets of their kind ever sent to the space station.

The iPads will join iPod music players already on the space station, as well as two iPhone 4 devices loaded with an app to help astronauts perform experiments.

This story was updated to correct the day of docking for the Progress 45 spacecraft, which will arrive at the space station on Wednesdat at 7:40 a.m. EDT (1140 GMT).