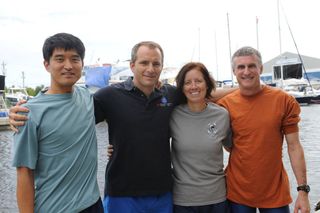 Four members of the NEEMO 15 crew are pictured after they were forced to return to the surface on Oct. 26, 2011, six days ahead of schedule, due to safety concerns surrounding Hurricane Rina. From left to right: Japanese astronaut Takuya Onishi, Canadian astronaut David Saint-Jacques, NASA astronaut Shannon Walker, and planetary scientist Steve Squyres.
(Image: © NASA)

NASA recalled the astronaut crew of a mock asteroid mission on the ocean floor today (Oct. 26) due to growing concerns about Hurricane Rina, which is threatening to make landfall along Mexico's Yucatan peninsula.

Since Oct. 20, a six-person crew of astronauts and scientists has been living at the Aquarius Underwater Laboratory, which sits 60 feet (18 meters) below the Atlantic Ocean, about 3 1/2 miles off the shore of Key Largo, Fla. But Hurricane Rina forced the crew to resurface about a week earlier than planned due to safety concerns from the strengthening storm.

"[Mission controllers] were watching the weather forecast yesterday and were 90 percent sure that they were going to have go to ahead and end the mission," NASA spokesperson Brandi Dean told SPACE.com. "If the forecast had changed dramatically, they could have stayed down, but that didn't happen."

NASA has also released a video of Hurricane Rina from space as seen by astronauts living on the International Space Station.

The asteroid simulation was the 15th expedition of NASA's Extreme Environment Mission Operations, or NEEMO, and was the first to test ways to anchor to an asteroid, explore its surface, and perform science experiments on the space rock. [Gallery: Astronauts Explore Undersea 'Asteroid']

The start of the NEEMO 15 mission had already been delayed due to what was then a tropical storm nearby. To ensure the crew's safety, the 13-day mission was cut short today at roughly the halfway mark.

Yesterday, NASA astronaut Mike Fossum, commander of the International Space Station, captured views of the menacing Hurricane Rina from aboard the orbiting complex. The video footage was captured at 2:39 p.m. EDT (1830 GMT) Tuesday (Oct. 25) as the space station flew 248 miles (399 kilometers) over the Caribbean Sea, east of Belize.

"Crew sad to leave early, but feel we got a lot of objectives accomplished," NEEMO 15 crewmember David Saint-Jacques said via Twitter this morning. "Overnight decompression fine. See you at surface"

NASA does not intend to resume the NEEMO 15 expedition at a later time, Dean said, but the crewmembers were able to accomplish many of the mission's goals while they were submerged.

"They were able to get a lot of good information," she said. "Obviously we would have liked to have gotten more, but they have to stay safe there."

The NEEMO 15 crew is made up of Saint-Jacques, NASA astronaut Shannon Walker, who was commander of the expedition, Japanese astronaut Takuya Onishi, planetary scientist Steve Squyres and two veteran divers, James Talacek and Nate Bender of the University of North Carolina, Wilmington.

The aquanauts were testing various concepts of how to anchor to an asteroid, travel around on its surface, and perform science experiments on a mock asteroid landscape that was assembled on the ocean floor. The crew completed six extravehicular activities outside the Aquarius habitat and collected a wealth of scientific data in the process, Dean said.

Yesterday, the crewmembers also participated in a series of behavioral science projects that included simulating communication delays with Mission Control that astronauts would encounter on a real-life mission to an asteroid.

The results of the NEEMO 15 mission will help NASA plan for a future trip to an asteroid. As part of NASA's exploration goals, the agency is aiming to send humans to an asteroid by the year 2025.

The NEEMO mission is a joint venture between NASA, the National Oceanic and Atmospheric Administration (NOAA), which owns the Aquarius laboratory, and the University of North Carolina, Wilmington, which operates the underwater facility.