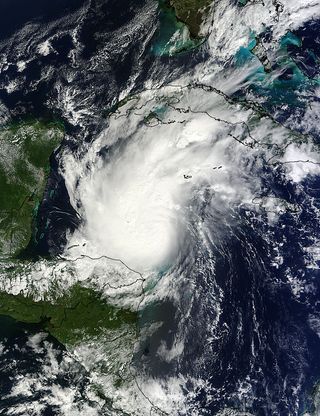 This visible image of Hurricane Rina was taken by the MODIS instrument on NASA's Terra satellite on Oct. 24, 2011 at 12:15 p.m. EDT (1615 GMT) when it was off the coast of Mexico. Rina's southwestern edge was over Honduras at this time.
(Image: © NASA Goddard MODIS Rapid Response Team)

From high above Earth, the astronauts on the International Space Station have a unique view of the menacing Hurricane Rina raging below, and by the looks of a video recorded today (Oct. 25), the view from space reveals quite a storm.

"We have a view of Hurricane Rina in the video camera here," space station commander Mike Fossum of NASA radioed to Mission Control in Houston. It's a biggun."

From Fossum's perspective, the cloudy white mass of the hurricane can clearly be seen beneath the space station as it passes overhead. The video of Hurricane Rina  from space compiles multiple camera angles from the orbiting lab. The footage was captured at 2:39 p.m. EDT (1830 GMT) today as the space station flew 248 miles (399 kilometers) over the Caribbean Sea, east of Belize.

Rina, which formed over the northwest Caribbean Sea, is the sixth of this year's Atlantic hurricane season. The hurricane is currently a Category 2 storm, but appears to be intensifying as it approaches southeastern Mexico's Yucatan peninsula. It could be bumped up to Category 3 or higher by tonight.

Hurricane Rina is currently located about 300 miles (483 km) east-southeast of Cheturnal, Mexico, and is moving west-northwest at a glacial pace of 3 mph (4.8 kph), according to NASA officials.

Hurricane warnings have been issued for the region stretching from north of Puna Gruesa, Mexico to Cancun.

Storms receive names when they are officially classified as tropical storms or hurricanes. Rina is the 17th named storm of the 2011 season.

Astronauts on the International Space Station often take photos or videos of compelling natural and man-made phenomena that are visible out the windows of the complex, including the northern and southern lights, massive storms or the lights from densely populated cities.