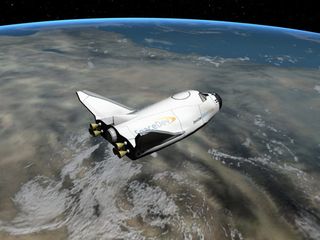 Private spaceflight companies are making good progress toward launching astronauts to space by the middle of the decade, according to a new NASA report.

In April 2011, NASA awarded a total of nearly $270 million to four firms during the second round of the space agency's Commercial Crew Development (CCDev) program, contingent on the companies hitting a series of successive milestones. In the last six months, those four companies together have already completed 18 of the 47 milestones, NASA's bimonthly "Return on Investment Report" states.

"There is a lot happening in NASA's commercial crew and cargo programs, and we want to make sure the public and our stakeholders are informed about the progress industry is making," Phil McAlister, NASA's director of commercial spaceflight development, said in a statement. "It's exciting to see these spaceflight concepts move forward." [Vote Now! Best Spaceships of All Time]

Looking for a new ride to orbit

After NASA retired its venerable space shuttle fleet this past July, the space agency lost its ability to launch astronauts to low-Earth orbit. It is now dependent on Russian Soyuz vehicles to ferry crews to and from the International Space Station, at a price of up to $62 million per seat.

The space agency is not content with this state of affairs, however. It wants American private spaceflight companies to take over this taxi service by the middle of the decade, and it's encouraging these firms' progress via efforts like CCDev.

NASA gave out $50 million to five different companies in the first round of CCDev funding in February 2010, then upped that purse considerably in the second round.

Aerospace veteran Boeing got $92 million in CCDev-2 to develop its CST-100 crewed vehicle, while Sierra Nevada Corp. got $80 million to continue work on its Dream Chaser space plane, which looks a bit like a miniature space shuttle. SpaceX got $75 million for its Dragon capsule/Falcon 9 rocket system, and Blue Origin received $22 million to continue work on its orbital space vehicle.

All of these companies have already met significant milestones laid out under CCDev-2, the report says.

Sierra Nevada, for example, completed its Vehicle Avionics Integration Laboratory, a system that will test Dream Chaser computers and electronics in simulated space missions. Boeing, along with partner Bigelow Aerospace, tried out some protoype CST-100 landing airbags in the Nevada desert.

Blue Origin finished two in-depth technical reviews. And SpaceX wrapped up the preliminary design review for its launch abort system, which will allow Dragon-riding astronauts to get out of harm's way should anything go wrong during liftoff.

The four firms should finish the remaining 29 milestones by about this time next year, according to a timeline released with the bimonthly report.

NASA has said it would like at least some companies to be flying astronauts to the space station by 2015 or 2016. SpaceX, Boeing and Sierra Nevada have all said they're on pace to hit that target, while Blue Origin officials recently pegged an operational start date between 2016 and 2018.