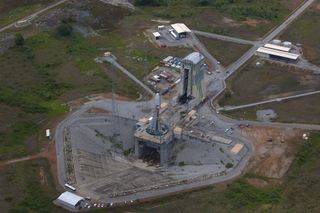 The launch debut of a Russian rocket from a European-run spaceport in South America was delayed Thursday (Oct. 20) by a fueling glitch, launch officials said.

The Soyuz rocket was expected to launch two new satellites for Europe's Galileo navigation system at 6:34 a.m. EDT (1034 GMT) from the Guiana Space Center in Kourou, French Guiana. The spaceport is the home port for the Europe's unmanned workhorse Ariane 5 rockets launched by the spaceflight firm Arianespace.

"Following an anomaly detected during fueling of the Soyuz launcher's third stage, the final countdown has been interrupted," Arianespace officials said in a status update. "The Soyuz and its two Galileo satellites, along with the launch facility have been placed in a safe mode." [50 Great Russian Rocket Launch Photos]

Spaceport officials constructed a new launch pad to accommodate Russian Soyuz rockets to allow the boosters to take advantage of the near-equatorial position of the Guiana Space Center and get a major boost from Earth's increased rotational speed. That advantage allows the Soyuz rocket to launch larger payloads into orbit than it could from the higher latitude spaceports Russia typically uses for Soyuz flights.

The twin Galileo navigation satellites each weigh about 1,540 pounds (700 kilograms) and will form the core of a planned constellation of European satellites to provide navigation services similar to the U.S. global positioning satellite (GPS) system. The Soyuz rocket is expected to launch the satellites into circular orbits 14,430 miles (23,222 kilometers) above Earth's surface.

Europe's $7.2 billion Galileo satellite system is ultimately expected to feature a constellation of 30 satellites that provide navigation information with an accuracy of about 3 feet (1 meter), European Union officials have said.