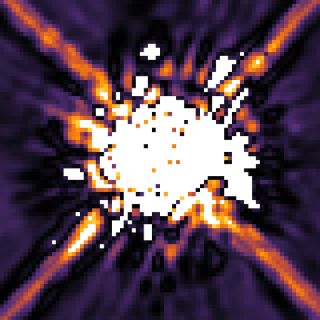 This image of the star HR 8799 was taken by Hubble's Near Infrared Camera and Multi-Object Spectrometer (NICMOS) in 1998. A mask within the camera (coronagraph) blocks most of the light from the star. Scattered light from HR 8799 dominates the image, obscuring the faint planets.
(Image: © NASA, ESA, and R. Soummer (STScI))

Like cosmic sleuths with a time machine, astronomers conducted a thorough re-analysis of old data collected by NASA's Hubble Space Telescope in 1998, and found visual evidence for two alien planets that went unnoticed 13 years ago.

The results of the study will be published in an upcoming issue of the Astrophysical Journal.

There are four known planets, all of them quite large, circling the star HR 8799. This massive but young star is located approximately 130 light-years away from Earth in the constellation Pegasus. [Photos of the star system and planets]

The first three gas giant planets around HR 8799 were discovered in 2007 and 2008 using images taken by a team of astronomers led by Christian Marois of the National Research Council in Canada. The researchers used the W.M. Keck Observatory and the Gemini North telescope, both in Hawaii, to spot the alien planets around their parent star.

In 2010, Marois and his colleagues uncovered a fourth and innermost planet around HR 8799. According to the researchers, this is the only alien multi-planet system of which astronomers have direct images.

The year before, in 2009, David Lafreniere of the University of Montreal in Canada located embedded exoplanet data in the images Hubble snapped of HR 8799 in 1998 using its onboard Near Infrared Camera and Multi-Object Spectrometer (NICMOS).

Using this archived data, Lafreniere pinpointed the position of the alien solar system's outermost planet, demonstrating the effectiveness of the novel data-processing technique to reveal faint planets shrouded by the bright glow of their host star.

Remi Soummer of the Space Telescope Science Institute in Baltimore, Md., pored over 10 years of NICMOS data, including the images taken in 1998, and found all three of HR 8799's outer planets. The fourth and innermost planet was not picked up by Hubble's NICMOS instrument because of its position on the edge of an area that is blocked by light from the star, researchers said. [The Strangest Alien Planets]

Astronomers were able to glean information about the orbits of these exoplanets using the old data from the prolific Hubble Space Telescope.

"From the Hubble images we can determine the shape of their orbits, which brings insight into the system stability, planet masses and eccentricities, and also the inclination of the system," Soummer said in a statement.

The three outer planets have very long orbits, taking 100, 200 and 400 years to travel around the star. This makes them difficult to study, because astronomers need to wait a long time to see how the planets move along their orbital paths. But the Hubble data gave the researchers a leg up.

Despite the passage of time, HR 8799's slowest-moving, outermost planet has barely changed position, but the astronomers did notice some changes with the star's other worlds.

The exoplanets went undetected in 1998 when Hubble first took the images because planet-hunting methods were not available at that time.

"We worked long and hard to achieve this result, and what's really exciting now is that we're going to apply the same method to a bunch of other stars, and hopefully we'll make some discoveries of our own," said Brendan Hagan, a recent graduate from Goucher College in Baltimore, and a member of Soummer's research team.

Soummer and his colleagues now plan to analyze roughly 400 other stars in Hubble's NICMOS archive using this data-processing technique.

From the archived NICMOS data, Soummer's team will assemble a list of planetary candidates to be confirmed by ground-based telescopes. If new planets are discovered they will once again have several years' worth of orbital motion to measure.