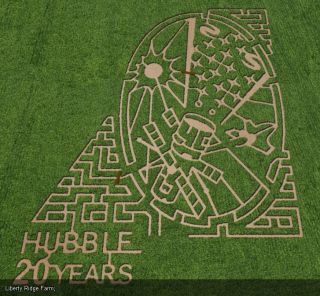 The Liberty Ridge Farm in Schaghticoke, New York showcased the Hubble Space Telescope in a vast corn maze. The maze is one of seven corn mazes across the United States by farms participating in the Space Farm 7 project in 2011.
(Image: © The MAiZE Inc./Space Farm 7)

Seven farms across the U.S., in collaboration with NASA, are inviting the public to get lost in space — the space inside crop circles — this fall.

The "Space Farm 7" project is designed to celebrate the accomplishments of the U.S. space program through "agri-tourism."

Take, for example, the Liberty Ridge Farm in Schaghticoke, N.Y., about 20 miles (32 kilometers) north of Albany.  It is the Northeast representative for the Space Farm 7, pairing up with NASA’s Goddard Space Flight Center to coordinate their leg of the program. [Photos: Space Farm 7's Crazy Corn Mazes]

Each farm's corn maze has its own theme. One focuses on the International Space Station while others honor NASA's Mars rovers and the planet-hunting Kepler spacecraft. Still another spotlights the 50th anniversary of human spaceflight, which occurred in April.

"Because the farms are so geographically dispersed, each was paired with a NASA center that serves their area," Dowdy told SPACE.com. "At the agency level, we could not be more excited to participate in this most extraordinary outreach endeavor."

Brett Herbst, owner of Cornbelly's and president of The Maize Inc. in Utah, designed and carved each maze. They will be open to visitors through November.

How did NASA go about reaching out to the selected farms?

NASA did not approach or select them, Dowdy said. A group of farms from across the country, working with The Maize Inc., submitted an unsolicited proposal to the Office of Informal Education to collaborate with NASA on an outreach program to celebrate 50 years of human spaceflight.

Adam Pugh of the Rock Ranch wrote and sent in the proposal.

That suggestion was vetted through the Office of Education and was adopted for implementation under NASA’s former Exploration Systems Mission Directorate.

Dowdy said NASA had several objectives in participating in the Space Farm 7 project, such as:

Dowdy said that there is a contest on the Space Farm 7 website that gives you a chance to vote for your favorite maze.

The grand prize is four maximum-access tickets to the Kennedy Space Center Visitor Complex, complete with four tickets to the Dine with an Astronaut program to use during the visit.

One wonders whether high-flying aliens will be allowed to vote, given all that crop circle-making expertise?