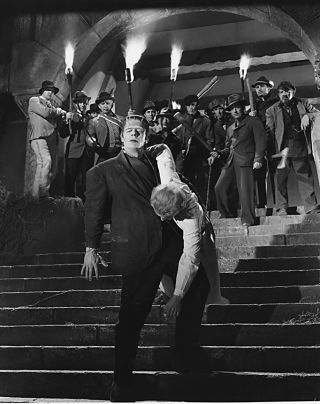 Despite a reign of terror that prompted angry villagers to take up torches and pitchforks against him, never once during his rampage did Frankenstein's monster question the honesty of author Mary Wollstonecraft Shelley.
(Image: © House of Frankenstein publicity photo 1382-54, 1944)

A group of astronomers used some crafty celestial sleuthing to put to rest a 19th Century mystery surrounding the events that inspired Mary Wollstonecraft Shelley, author of the classic novel "Frankenstein," to pen her tragic tale of the infamous monster.

Astronomers from Texas State University-San Marcos delved into Shelley's own description of what moved her to write the legendary story, in hopes of solving a long-standing controversy over whether the account is true, or if the author took some liberties in her re-telling of what happened.

"Shelley gave a very detailed account of that summer in the introduction to an early edition of 'Frankenstein,' but was she telling the truth?" said Donald Olson, a member of Texas State's faculty of physics. "Was she honest when she told her story of that summer and how she came up with the idea, and the sequence of events?" [Amazing Photos: Harvest Moon of 2011]

The researchers meticulously retraced the chronology of events, even journeying to the villa in Switzerland where Shelley was at the time, to finally prove that her account rings true. What they found was that Shelley's mention of moonlight streaming through her window was a key piece of the puzzle.

In June 1816, Shelley attended a gathering at Villa Diodati, which overlooks Switzerland's Lake Geneva. Shelley, who was 18 at the time, was accompanied by her future husband, Percy Bysshe Shelley, her stepsister, Claire Clairmont, Lord Byron and John Polidori.

On one dark and stormy night, after the group read a volume of ghost stories, Byron challenged each member of the party to write their own chilling story.

"The chronology that's in most books says Byron suggested they come up with ghost stories on June 16, and by June 17 she's writing a scary story," Olson said in a statement. "But Shelley has a very definite memory of several days passing where she couldn't come up with an idea. If this chronology is correct, then she embellished and maybe fabricated her account of how it all happened."

A separate version of the events states that Byron made his suggestion on June 16, and that after a gap of five or six days, Shelley came up with her idea for "Frankenstein" on June 22.

"But our calculations show that can't be right, because there wouldn't be any moonlight on the night that she says the moon was shining," Olson said.

As it turned out, Shelley's description of the moonlight was an invaluable clue for the researchers.

In the author's account, she was unable to come up with an idea for her story until after a late-night philosophical discussion about the nature of life. This conversation lasted past the witching hour of midnight, and when Shelley finally adjourned for the night, she woke from a terrifying dream about a man who attempted to use science to breathe life into what turned out to be a terrifying figure. [Related: Why We Love Sci-Fi: It Boldly Goes Where Other Stories Can't]

Shelley described the nightmare and how she woke to find moonlight streaming in through her window. By her account, she began writing "Frankenstein" the next day.

Diary entries and other primary sources

The gathering at Villa Diodati and Byron's challenge to the group has been well-documented, Texas State officials said, but some researchers and historians have doubted Shelley's telling of the events. From Polidori's diary entries, which describe the gathering at Villa Diodati, the commonly accepted date for Byron's challenge is June 16. In Polidori's entry for the next day, June 17, he wrote, "The ghost-stories are begun by all but me."

Analysts have pointed to Polidori's diary entries as proof that Shelley did not struggle for days over an idea for her story. Some have even suggested that Shelley embellished some of the details written in the preface of the 1831 edition of "Frankenstein" to sell more copies of the book.

But, further adding to the air of mystery, is the fact that Polidori makes no specific mention of Byron's ghost story challenge in his diary entries.

"There is no explicit mention of a date for the ghost story suggestion in any of the primary sources — the letters, the documents, the diaries, things like that," Olson said. "Nobody knows that date, despite the assumption that it happened on the 16th." [In Images: Mysterious Night-Shining Clouds]

Putting a mystery to bed

Other primary source material, such as letters and journals, establish that Byron and Polidori arrived at the Swiss villa on June 10. From this, the researchers were able to determine that Byron's challenge must have occurred sometime between June 10 and 16.

Next, they took into account Shelley's moonlight reference on the night of her pivotal dream. Olson and his colleagues traveled to Villa Diodati in Switzerland in August 2010 to get a better idea of which nights in June 1816 bright moonlight could have streamed through Shelley's window.

The astronomers took topographic measurements of the terrain and pored through weather records from the time period to get a better idea of lunar activity in June 1816. Olson and his colleagues calculated that a bright, gibbous moon would have cleared the hillside and shone directly into Shelley's bedroom window just before 2 a.m. on June 16.

This timeframe is consistent with Shelley's reference to being up past the witching hour. It also agrees with another of Polidori's diary entries that describes a late-night philosophical "conversation about principles" of life that took place on June 15.

The moonlight was a key astronomical clue that supported Shelley's claims. Evidence from this new study now suggests that Byron's ghost story challenge took place sometime between June 10 and 13, and Shelley's terrifying dream occurred between 2 a.m. and 3 a.m. on June 16, 1816.

"Mary Shelley wrote about moonlight shining through her window, and for 15 years I wondered if we could recreate that night," Olson said. "We did recreate it. We see no reason to doubt her account, based on what we see in the primary sources and using the astronomical clue."

The study's findings are published in the November issue of Sky & Telescope magazine.