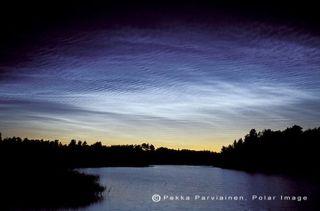 Noctilucent Clouds over Kustavi, Finland. Photo taken July 27/28, 2001, at approximately 12:30 AM local time or 4 hours after sunset. This image shows a noctilucent cloud illuminating the water below and a gold hue on the horizon.
(Image: © Pekka Parviainen.)

Highaltitude clouds were detected over Antarctica shortly after the fateful launchof the space shuttle Columbia. The factthat some of these clouds are born out of shuttle exhaust may require arethinking of their role as a diagnostic for global climate change.

Aswith all shuttle launches, about 97 percent of this exhaust turns into water -a by-product of the liquid hydrogen and liquid oxygen fuel. The resulting 400 tons of extra water in theatmosphere has an observable effect on cloudformation.

Otherrocket launches inject water into the atmosphere, but none so much as theshuttle launch vehicles. Because of lowtemperatures and the high concentrations of water from Columbia's exhaust,Stevens and his colleagues observed a significant increase in polar mesosphericclouds over Antarctica in the days following the launch.

Polar mesospheric clouds - also called noctilucent clouds -form in the summer over the poles at altitudes of about 52 miles (84kilometers), making them the highest clouds in the Earth's atmosphere. They have been monitored in recent yearsbecause they are thought to be sensitive to the temperature and humidity of theatmosphere.

"Because the brightness, occurrence, and range of theclouds have been increasing, some scientists have suggested that they areindicators of global climate change," said Xinzhao Chu from the Universityof Illinois at Urbana-Champaign. "That role needs to be reconsidered,however, because of the potential influence of water vapor in shuttleplumes."

Shuttlemissions have been on hold since 2003, after Columbiaand its crew were lost during reentry. The return to flightis scheduled for July 13 of this year.

A paper describing these results appears in the July 6 issueof Geophysical Research Letters.