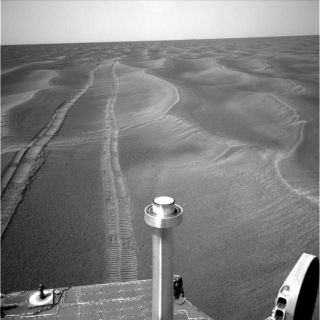 Free to roam Opportunity Mars rover has been carefully assessing sand dune dynamics. The robot is soon to hit the trail toward the large Erebus Crater.
(Image: © NASA/JPL.)

NASA'sdual Mars rovers - Spirit and Opportunity - are wheeling about in theirrespective zones of exploration: Gusev Crater and Meridiani Planum.

Scientistsand engineers are delighted to see the golf cart-sized robot free to move about- after being ensnared in sand for some five weeks.

Nowthe robot is out of purgatory, quite literally, and making short runs withinMeridiani Planum.

"We think we've got a few clues about what made Purgatory Dune different fromthe ones we drove over before we hit it. It's a little taller than the dunesthat came before it, and a little steeper, Squyres told SPACE.com. "We also have a hunch that the dunesthat run from northwest to southeast, like Purgatory does, may be a little younger and alittle softer than the ones that run north-south," he explained.

Squyres said rover operators on Earth are now driving Opportunity to the north,but only for a short distance. From that vantage point, scientists andengineers will take a careful look around, south and east and west, to find thesouthward path that has the fewest Purgatory-like obstacles.

"Oncewe've found our preferred path, we're going to turn south again and drive, verycarefully, back into the thick of it," Squyres said.

Squyres advised not to expect over 650 feet (200 meter) rover drives anytimesoon. "We'll have our safety checks turned on, and that'll make for slower going."

Butthe goal now is, Squyres said, what the goal was three months ago: ErebusCrater.

Inhis rover update on a Cornell University rover web site, Squyres said thatinstruments on Opportunity's robot arm have been used to study dune dynamics.The hope is to avoid running into another Purgatory Dune.

Followingdrives to the north first -- away from Erebus -- there will be "long hard pushsouth" toward that large crater and its attraction of geological features.

Forthe Spirit rover, on the other side of Mars, science work high in the ColumbiaHills -- within Gusev Crater -- has been going extremely well.

Lastweekend, the robot stopped to look at an outcrop on the west side of "HusbandHill". All the target names under study were themed to "4th of July", saidLarry Cumpler at the New Mexico Museum of Natural History and Science in Albuquerque. He is on the Mars rover science team.

Spirit'sinstrumented robot arm surveyed an outcrop named "Independence", while a specifictarget for science study was dubbed "Franklin". Other targets include some ofthe other signers of the Declaration of Independence...and other spots were namedafter various types of fireworks, Crumpler told SPACE.com.

Thisweek, the hope of Spirit operators is to steer the rover to ever-higherelevations.

Squyressaid the Spirit team is a little puzzled why the rover is barely leavingtracks. The ground is hard, he noted on the Cornell rover web site.

"Itmakes for great traction and great climbing. I'm still not confident that we'llmake it to the summit, since the images seem to show a transition to softerground with more loose rocks ahead. But we're enjoying the conditions while we'vegot them," Squyres reported.