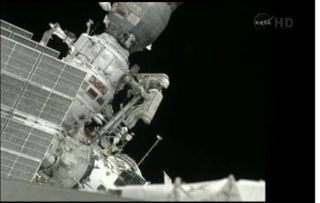 Two Russian cosmonauts tossed an amateur ham radio satellite into orbit during a spacewalk outside the International Space Station today (Aug. 3), despite the fact that the boxy satellite might be broken.

Clad in bulky spacesuits, cosmonauts Sergei Volkov and Alexander Samokutyaev carefully let go of the small educational satellite, called ARISSat-1 or Radioskav-V, at 2:43 p.m. EDT (1843 GMT) as they sailed 220 miles (354 kilometers) above Earth. As the satellite drifted away from the station's Russian segment, the cosmonauts reported that the view was "beautiful, very nice."

The cosmonauts took special care to release the 57-pound (26-kilogram) ARISSat-1 on a preplanned path trailing the space station to ensure that the satellite did not collide with any part of the orbiting lab's outer hull.

The satellite was originally scheduled to be tossed off the station at the very start of today's spacewalk, but the cosmonauts hit a snag during that attempt when ground teams noticed only one antenna on the satellite instead of the two it is supposed to have.

"It looks like it's been broken," Samokutyaev radioed to Mission Control, adding that the satellite is "pretty fragile."

Mission Control ordered the cosmonauts to delay the satellite deployment and perform other chores to allow time to study the issue. After some analysis, the spacewalkers said the second antenna on ARISSat-1 was clearly missing or damaged.

The prototype ARISSat-1 is the first test flight of a proposed series of small educational satellites developed as a cooperative effort between NASA, the Radio Amateur Satellite Corp. (AMSAT), Amateur Radio on the International Space Station (ARISS), and the Russian Federal Space Agency.

Because the satellite is operating with only one antenna, ground teams will only receive 50 percent of the spacecraft's data, NASA officials said. After much discussion, mission controllers decided to proceed with the satellite's release, despite the missing second antenna. The satellite is expected to remain in orbit for nine months before it is sent to burn up in Earth's atmosphere.

The ARISSat-1 satellite was designed and built by amateur radio operators to help drum up interest in scientific and technological careers among students.

Using ham radio equipment in classrooms, students and teachers will be able to gain access to data from the satellite. ARISSat-1 will transmit still-frame video Earth views from four onboard cameras, voice recordings of commemorative greetings in the native languages from students around the world, including messages celebrating the 50th anniversary of Yuri Gagarin's flight that marked the first human in space.

The satellite is also carrying a student experiment that will collect readings from a sensor to measure the pressure in Earth's lower atmosphere.

As ground teams assessed the damaged ARISSat-1 satellite, the spacewalkers installed an experimental laser-based communication system that will be used to transmit data from Russian science experiments at extremely high speeds down to Earth. The barbecue grill-shaped system as installed on a work platform outside the Russian Zvezda service module behind its solar arrays. [Inside and Out: The International Space Station]

Volkov and Samokutyaev then took photographs of a nearby antenna that is not performing as expected. The pictures will be sent back to Earth to help engineers pinpoint the issue.

Due to the early setbacks, flight controllers in Houston and Moscow adjusted the tasks for today's excursion, and were forced to couch certain activities for a later spacewalk.

Volkov and Samokutyaev were scheduled to move a long extension arm from one spot on the Russian segment to another – a task that was expected to take about three hours. This activity will now be saved for a future spacewalk. After the extension arm is properly installed, station residents will use it to move large pieces of cargo around on the outside of the station's Russian modules.

After releasing the ARISSat-1 satellite, the spacewalkers retrieved an obsolete antenna that was originally used to help spacecraft dock to the Poisk module on the station's Russian segment. Since the antenna is no longer needed, Volkov and Samokutyaev brought it back inside the station with them at the end of the spacewalk.

To round out the day's work, Volkov and Samokutyaev retrieved an experiment and installed it outside the Pirs module. The experiment, called Biorisk, will examine the effects of bacteria and fungus on structural materials used to build spacecraft. The experiment will focus on how solar activity may influence the growth of these microbes.

Before re-entering the station's airlock, Volkov and Samokutyaev took some commemorative photographs to celebrate the history of Russia's space program. Portraits of cosmonaut Yuri Gagarin, the first human being in space, Sergei Korolev, who is regarded as the founder of the country's space program, and Soviet rocket scientist Konstantin Tsiolkovsky, were held outside the airlock by Samokutyaev, allowing the portraits of the Russian space titans to "fly" in space.

Volkov took pictures of Samokutyaev holding the three portraits, with Earth framed in the background. The images of the three influential figures had been hanging inside the station's Russian segment for some time, NASA officials said, but were brought out into the vacuum of space for the first time today.

Before finishing the day's work and closing the station's hatches, the spacewalkers marveled at the spectacular views of Earth below.

Today's outing was Volkov's third spacewalk, upping his total time spent outside the station to 18 hours and 35 minutes. This was Samokutyaev's first spacewalk, bringing his total to six hours and 23 minutes. Today's excursion was the 136th total spacewalk performed by Russian cosmonauts, and the 161st spacewalk in support of construction and mainteneance of the International Space Station

This was the second spacewalk performed by members of the station's Expedition 28 crew, and the last planned excursion for this year. Previously, NASA astronauts Mike Fossum and Ron Garan completed a spacewalk in July during the final space shuttle mission - the STS-135 flight of Atlantis. The next Russian spacewalk is slated to take place in February 2012.