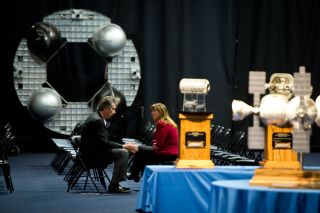 MOUNTAIN VIEW, Calif. — Despite concerns that funding shortfalls will hamper NASA's efforts to promote a private industry capable of ferrying cargo and crew into low Earth orbit, government and industry officials attending the Space Frontier Foundation's annual conference said they were confident that commercial firms would continue to play an increasingly important role in the U.S. space program.

NASA officials are working diligently "on evolving the way we work with the private sector," Deputy Administrator Lori Garver said July 28 at the NewSpace 2011 conference here.

While the overall percentage of NASA's budget going to the private sector is likely to remain at the current level of approximately 85 percent, the space agency is changing the way it spends that money in an effort to help private companies "leverage that money to bring in more private investment, more innovation, open new markets, reduce costs and provide economic gain." [10 Private Spaceships Headed for Reality]

If this approach is successful, Garver said, it will help to expand the number of jobs available in the space industry that do not depend entirely on government spending. Noting that the conference included a meeting for people interested in working for Space Exploration Technologies (SpaceX), Garver said she hoped to see the emergence of additional companies like SpaceX that could offer new jobs for aerospace workers.

The challenge of space transition

During this period of transition, however, it is challenging for some groups within NASA to relinquish their traditional roles in facilitating space transportation. Employees of NASA's Kennedy Space Center, for example, have to revamp their entire business model to turn a center that for decades has depended heavily on major government programs like the space shuttle to cover all the center's expenses into one that can support a variety of commercial space activities and become a multiuse spaceport.

"It’s a huge challenge," Kennedy Space Center Director Robert Cabana said. "Nobody likes change. … But the bottom line is we need the capability to get crews to the International Space Station without having to rely on our Russian partners. So we are putting infrastructure in place to support and enable those commercial operations as well as NASA's heavy-lift exploration program."

Learning to work in partnership with private industry is critical to the Kennedy Space Center's future and to NASA’s future, Cabana said. "I really believe we are at a turning point," he said. "If we persevere through this we are going to be successful. We don't have any other choice."

Much of the discussion at the NewSpace conference focused on NASA's commercial crew and cargo transportation programs.  Government and industry officials expressed doubts that those programs could escape unscathed from proposed federal spending cuts.[Vote Now! The Best Spaceships of All Time]

If the $312 million budget proposed for commercial crew transportation by the House Appropriations Committee in July becomes law, "it would be very challenging for us to maintain multiple partners, maintain progress and fly folks in the middle part of the decade," Brent Jett, an astronaut and deputy manager for NASA's Commercial Crew Program, said. "At some point, we have to spend more than a couple hundred million dollars to fly."

In April, NASA announced plans to award a total of $270 million to four companies working to develop commercially operated crew taxis: Chicago-based Boeing Co., Blue Origin of Kent, Wash., Sierra Nevada Corp. of Louisville, Colo., and SpaceX of Hawthorne, Calif. That funding is for the second phase of the Commercial Crew Development (CCDev) program. It was awarded under commercial Space Act Agreements, which pay firms for achieving specific milestones but do not require companies to adhere to government contracting rules.

A NASA plan revealed July 20 to use more traditional government procurement practices for the third phase of the CCDev program has raised concerns among industry officials who said additional regulatory oversight is likely to raise costs and delay progress in building the new spacecraft.

"Both the first and second phases of the CCDev program were completed under Space Act Agreements," Garrett Reisman, SpaceX CCDev 2 project manager, said. "We want to continue that successful model."

Following detailed federal acquisition rules would require a cultural shift for SpaceX employees who do not fill out time cards, Reisman said.

Even if the federal cost accounting rules were waived for the commercial crew program's forthcoming integrated design phase, as some NASA officials have suggested, industry teams would need to hire accountants and lawyers to make sure they understood all the new requirements, could comply with those rules and could document that compliance, said James Muncy, a longtime commercial space advocate and president of PoliSpace, an independent consulting firm in Alexandria, Va.

NASA officials said they welcomed industry comments on the subject.

"We need this input," Jett said. "We need to understand what clauses in the [Federal Acquisition Regulation] cause those problems."

NASA officials are trying to minimize overhead and make sure industry partners have the flexibility they need to work effectively and quickly, Jett said.

Garver added, "Don’t give up on us. This is too big, too important to fail."

Astronaut safety is a very emotional issue for people at NASA, Garver said, calling it "the heart and soul of NASA." That makes it hard for some in government to turn the job of building space taxis over to industry without retaining the level of oversight offered by federal acquisition regulations and cost-plus contracts, she added.

The commercial cargo program worked because companies working under fixed-price contracts had incentives to build the vehicles as quickly and inexpensively as possible, she said. "We have to structure programs so there are not incentives for us to add hundreds of thousands of requirements," Garver said.