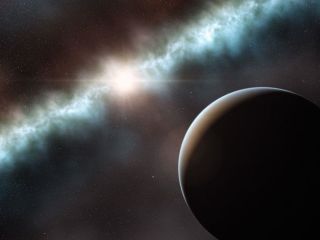 Dark matter is perhaps not the first thing that comes to mind when considering how life can be supported on another planet, but to Dan Hooper and Jason Steffen of the Fermilab Center for Particle Astrophysics, dark matter could be a contributing factor in allowing life to evolve and survive on distant worlds outside of our solar system.

The scientists propose that dark matter particles could sink into a planet’s core, and through the annihilation of matter, release enough energy to keep the surface of the planet warm enough for liquid water, even outside the traditional habitable zone.

Dark matter was first postulated in 1933 by Fritz Zwicky, and then again in the 1970s by Vera Rubin to account for evidence of ‘missing mass’ in the orbital velocities of galaxies in clusters and stars at the edges of galaxies. Dark matter is inferred to exist from its gravitational effects on visible matter and background radiation, but it emits no visible light and does not interact with any other matter except by gravity.

Despite elusive evidence for its existence, it has been hypothesized to make up around 23 percent of the composition of the universe (the rest being 4 percent “normal” matter and 73 percent dark energy, which is the unknown force driving the accelerating expansion of the Universe).  Dark matter is said to influence the evolution of the universe gravitationally, even though scientists are still in the dark as to what it is.

“The reason we don't see dark matter directly is that it is made up of very weakly interacting material,” says Hooper.  He is the lead author of a paper submitted to Astrophysical Journaltitled, “Dark Matter and the Habitability of Planets,” which describes one theory for dark matter – weakly interacting massive particles, or WIMPs. “For that reason, it doesn't interact - or do much of anything else - very much.  It’s basically inert, and thus doesn't produce much usable energy.”

However, Hooper and Steffen have suggested a way in which what little energy does come from dark matter can keep planets warm. Some parts of the galaxy – in particular the galactic center, as well as the cores of dwarf galaxies that are satellites of our own Milky Way – contain a much higher concentration of dark matter (of the order of hundreds or thousands of times more dense) than the region of space near our sun. Hooper and Steffen have calculated that when dark matter particles scatter with the atomic nuclei within the cores of rocky planets, they lose momentum and become gravitationally-bound and sink to the core of the planet, where they annihilate and release energy. [Video: Sifting Through the Cosmic Sands for Dark Matter]

“If a dark matter particle passes through a planet, there is a chance that it will collide with an atom and lose some of its speed and momentum,” explains Hooper. “Once this happens, instead of just flying off into space again, it can be stuck to the planet by the force of gravity and once that happens, it does not take very long for the dark matter particle to fall into the core of the planet, where it will stay.”

In dark matter-rich regions of space, enough dark matter can accumulate inside ‘super-Earths’ -- rocky planets with masses several times that of our home planet -- to provide enough energy to keep the surface of the distant world warm enough for liquid water to exist. This holds even far outside the star’s habitable zone, which is usually described as the distance from the star where temperatures, among other factors, allow water to remain as a liquid on the planet’s surface -- an essential condition for life as we know it. In principle, dark matter-rich planets could widen the habitable zone and increase the number of locations where we could find life.

However intriguing this is, it may be too good to be true. “I’m dubious as to how common dark-matter-heated planets really are,” says astrobiologist Lewis Dartnell of University College London. “Although their model is consistent with some theories of the nature and distribution of dark matter, it seems to appeal to a rather special set of conditions. And such rare planets would be virtually impossible to actually spot.”

Nevertheless, with billions of planets predicted to exist in our galaxy, it appears possible that some planets could benefit from dark matter, and these worlds would be very different to Earth.

“Life on a planet heated by dark matter would likely be very different than the life on Earth,” says Hooper. “Many species of planets on Earth, for example, have evolved to collect energy from sunlight.  On a dark-matter-powered planet, the energy would be coming from the center of the planet, and life there would have to find other ways of putting that energy to use.”

The heat provided by the annihilations of dark matter, state Hooper and Steffen in their paper, could keep a planet habitable for trillions of years, even beyond the lifetime of its star.

Despite his skepticism, Dartnell recognizes the importance of Hooper and Steffen’s work. “It is an intriguing idea, and astrobiology as a discipline needs a healthy input of fresh, bold ideas like this one.”