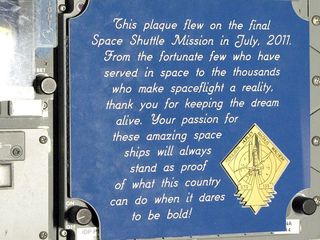 The plaque left on board Atlantis by the astronauts who flew the final mission of the space shuttle, STS-135, in July 2011.
(Image: © Twitter/@Astronut099)

HOUSTON — Chris Ferguson almost forgot to leave it on board.

Caught up in the moment of having just landed the space shuttle, ending NASA's 30 year shuttle program after 135 flights, commander Ferguson followed his crew out of shuttle Atlantis and only then realized he had forgotten about the plaque.

"If I was as clear thinking as I wish I was right after landing, I would have put it right on there but I had to have someone run back and pull it out of my saddlebag and put it on there for me," Ferguson said Friday (July 22), a day after landing, after his return home to Houston.

The small plaque, which was sized to fit perfectly over the center display screen in Atlantis' cockpit, was already a bit of an "afterthought" by the STS-135 crew, one devised with the help of the astronauts' simulator training team. Still it was the thought that counts.

"The inscription is from the heart," said Ferguson.

"It was basically a tribute to the people who had worked on the space shuttle program since day one thanking them for their dedication," Ferguson told collectSPACE.com a few hours after landing, revealing the plaque's existence for the first time, "to let them know how much we thought about the work that they do, from the astronauts, from the people who get to operate the vehicle that they maintain."

"A lot of people think that the astronauts live in Florida and that we rub elbows with these folks every day. But we don't, we live far away and sometimes it is a little bit of an effort to get out here and give them the thanks and the praise they deserve," said Ferguson. [9 Weird Things Flown on NASA Shuttles]

The blue plaque with its white writing, which was adorned with a gold-color rendition of the STS-135 crew's mission emblem, was inscribed as follows:

“This plaque flew on the final Space Shuttle Mission in July, 2011. From the fortunate few who have served in space to the thousands who make spaceflight a reality, thank you for keeping the dream alive. Your passion for these amazing space ships will always stand as proof of what this country can do when it dares to be bold!”

The words repeated some of the same sentiments shared by Ferguson and his crewmates pilot Doug Hurley and mission specialists Sandy Magnus and Rex Walheim from orbit. Numerous times throughout the nearly two-week flight, the astronauts called down to Mission Control to give their thanks to the many people on the ground who made the shuttle program a success. [Photos: NASA's Last Space Shuttle Landing in History]

The plaque was also among the small stash of mementos that the astronauts flew on Atlantis to mark the shuttle's end. During the mission, the crew revealed banners that paid tribute to the shuttle workforce and to the city of Houston — presented after landing to the Kennedy Space Center and the mayor of Houston respectively — as well as placed a U.S. flag carried on the first shuttle mission in 1981 and a model of the shuttle autographed by program managers aboard the International Space Station.

Where the plaque stays, be it on Atlantis or somewhere else, will be up to those preparing the shuttle for its display at the Kennedy Space Center Visitor Complex.

"We didn't want to make it permanent. We certainly didn't want to deface Atlantis. We wanted to leave it up to the ground processing crew to decide what to do with what we left behind," said Ferguson.

The STS-135 plaque was not the first time a crew had left a parting message aboard a spacecraft. In fact, it wasn't even the first time one was left on Atlantis. Continue reading at collectSPACE.com.