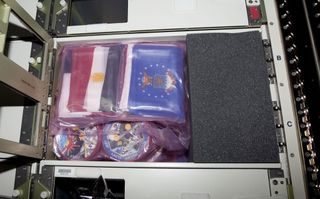 The final astronaut crew to fly on a space shuttle has a secret in store for everyone watching when the astronauts pause during their mission to offer a tribute to NASA's 30-year shuttle program.

The four crewmembers have some special souvenirs packed on shuttle Atlantis, but what they are, they aren't saying.

"Our commander wants to keep a lot of that a surprise for the day that we do those things," said Atlantis' pilot Doug Hurley in a pre-flight interview. "Obviously, there may be some mementos involved before we leave the space station for the last time."

"But just trust us. Watch the mission and you'll see some neat stuff," he said.

Hurley did share with collectSPACE.com that he thought it was their commander, veteran spaceflyer Chris Ferguson, who came up with the idea for what to fly. [9 Weird Things That Flew On NASA's Space Shuttles]

Ferguson, Hurley, and mission specialists Sandy Magnus and Rex Walheim are scheduled to launch aboard Atlantis on Friday (July 8) at 11:26 a.m. EDT (1526 GMT), weather permitting. Their 12-day mission, called STS-135, will be the 135th and final flight of the shuttle program.

Atlantis will lift off with a large cargo module packed with thousands of pounds of critical equipment, experiments and a year's worth of supplies for the International Space Station.

The fully-packed shuttle still had room however, for some souvenirs — not all of them secret.

"We've had a lot of requests. Everybody with just that one last thing that they would like to fly on a space shuttle," said Ferguson. [Photos: NASA's Prepares for Final Shuttle Flight]

Since before the first orbiter flew on April 12, 1981, shuttle astronauts and their NASA managers have had two types of opportunities to grant some of those requests.

The crewmembers can pack up to 20 small mementos in their Personal Preference Kits, or PPKs. These items cannot be commercial in nature and are generally gifts for family members and friends.

Then there's the Official Flight Kit (OFK), a duffle bag-size container used to fly mementos for organizations in and outside of NASA that have contributed to the mission's goals or to the astronauts' success. The contents of the OFK remain stowed inside a locker for the length of the mission, only to be unpacked and distributed after the shuttle has landed.

As its name implies, the PPKs are personal and so, like this mission's secret commemorative mementos, it is up to the astronauts whether they publicly disclose what they are flying. The OFK's inventory is slightly less secretive, and collectSPACE.com has obtained this last mission's flight kit contents and published it here.

Among the final shuttle OFK's highlights are more than 20,000 small American flags, nearly 2,000 various shuttle mission patches, almost 4,000 space station patches and more than 900 assorted U.S., military and country flags. These flown-in-space souvenirs will be given out to space program workers and VIPs as a token of gratitude for their support of the mission and program.

That's not to say that all the mementos flown come in large quantities; many are unique to the individual organizations for which they are on board. [Final Countdown for NASA's Last Shuttle Flight]

"I am taking a medallion that will celebrate the centennial of naval aviation," said Ferguson. "It's a milestone for the Navy, Marine Corps, and Coast Guard as they celebrate 100 years of flying and with Doug and I both with naval aviation training backgrounds, we thought it appropriate."

"I have a small Marine Corps flag and a small Navy flag," added Hurley. "We're very proud to be naval aviators and we just want to take a little bit of that with us into space.

Both the commander and pilot also have items that reflect their personal histories and interests.

Ferguson grew up in Philadelphia, where he said he often visited a local science museum, the Franklin Institute. The astronomy director there offered Ferguson a small part of the Institute's Fels Planetarium to fly.

"I will take that and when [the flight] is all done, I'll present it back to them and they can hold it up as an example of what flew on the very last space shuttle flight," Ferguson said.

For his part, Hurley has included several NASCAR flags, including a "No Limits" banner flown for the Texas Motor Speedway in Fort Worth.

"I am a season ticket holder and the president of the speedway found out about that a couple of years ago. So we got to be friends," said Hurley. "It was kind of cool to be able to do this for them."

Magnus and Walheim both have on board "small trinkets" and "charms" for their family members. Walheim also has "some medallions" while Magnus chose to fly items from the universities she attended.

Magnus told collectSPACE.com that she believes she understands the appeal of having something aboard the shuttle.

"I think for people who are outside the space program it is sort of exciting because it makes you part of the space program. It is special because it is the idea that this thing has been on this long wonderful journey and I think that excites people," she said.

View the complete, illustrated inventory for the space shuttle’s final Official Flight Kit, only at collectSPACE.com.