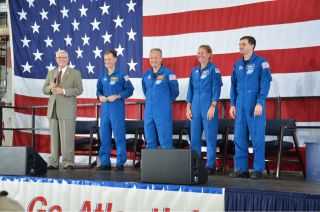 HOUSTON — The four astronauts who landed aboard NASA's final space shuttle mission on Thursday returned home to Houston today (July 22), where they received a heroes' welcome.

There, inside a NASA hangar, they were met by a crowd of hundreds, including their families, friends, space program colleagues and the public, who had come out to welcome them home. Among the attendees were senator Kay Bailey Hutchison (R-Tex.) and Houston mayor Annise Parker. [Photos: NASA's Last Space Shuttle Landing in History]

"All of Houston is here to say thank you for a job well done," Parker said.

Ferguson presented Parker with a banner flown in space.

Seated on a stage positioned in front of a wall-size American flag, the last shuttle astronauts offered their gratitude to the NASA teams that prepared them for their mission, called STS-135.

"Houston is, and always will be, the first word in space," Ferguson said.

On the 13-day mission, the STS-135 crew delivered to the International Space Station more than 9,400 pounds of spare parts, spare equipment and other supplies in the Raffaello multi-purpose logistics module, including a year's supply of food. The 21-foot long, 15-foot diameter Raffaello brought back to Earth nearly 5,700 pounds of unneeded materials from the station.

Thursday's pre-dawn landing marked an end to NASA's 30-year space shuttle program. After 135 missions — 33 flown by Atlantis and the remainder spread over the space agency's four other orbiters, Columbia, Challenger, Discovery and Endeavour — the reusable winged spacecraft were retired. NASA will now focus on sending astronauts beyond low Earth orbit to destinations including an asteroid, the moon and ultimately, Mars.

Meanwhile, commercially-operated spacecraft are being developed to pick up the shuttle's job of conveying cargo and crews to and from the space station. The first commercial cargo delivery is targeted to launch later this fall, while crewed flights are planned to begin in 2014 or 2015.

The homecoming celebration was in of itself an end to a 30-year tradition. Johnson Space Center has held similar gatherings dating back to the first space shuttle mission, STS-1, in April 1981. NASA broadcasted the STS-135 crew's reception live on its television channel, a rarity for the space agency, which generally has treated the event more as a local celebration. [By the Numbers: NASA's 30-Year Space Shuttle Program]

For the STS-135 astronauts, today's gathering wasn't the finale for their time working together as a crew.

"We start in debriefs on Monday," said Hurley during a press conference held several hours after their landing. "We'll probably be pretty busy — the debrief process usually takes a couple of weeks — and then there is some post-flight PR appearances that we'll do after that."

"So we've got a few more months I think together, which is great. Because it would be hard to kind of stop it right now," he said.

Robert Pearlman is a SPACE.com contributor and editor of collectSPACE.com. You can follow him @robertpearlmanor on Facebook. Visit SPACE.com for complete coverage of Atlantis' final mission STS-135 or follow us @Spacedotcom and on Facebook.