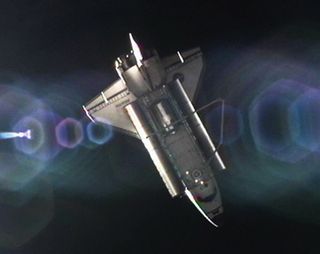 Space shuttle Atlantis is seen in this still from a video camera on the exterior of the International Space Station after the two spacecraft undocked on July 19, 2011 during the final shuttle mission STS-135. It was the last time a NASA shuttle cast off from the orbiting lab.
(Image: © NASA TV)

NASA's space shuttles have racked up an amazing set of accomplishments over the last 30 years, not to mention the miles and statistics. But after three decades and 135 flights, the era of the NASA space shuttle is at an end.

$209 Billion: The estimated total cost of NASA's 30-year space shuttle program from development through its retirement.

3,513,638: The weight in pounds of cargo that NASA's space shuttles have launched into orbit. That's more than half the payload weight of every single space launch in history since 1957 combined.

198,728.5: The number of man-hours NASA shuttles spent in space during their 30-year history. That's about 8,280 days of manned spaceflight, NASA officials said.

20,830: The number of orbits of Earth completed by NASA shuttles before the last 13-day mission of Atlantisduring the STS-135 flight. Atlantis will add another 200 orbits to that tally.

3,000: The scorching hot temperatures (in Fahrenheit) experienced by NASA shuttles in the hottest moments of atmospheric re-entry during landing.

833: The total number of crewmembers of all 135 space shuttle missions, with some individuals riding multiple times and 14 astronauts killed during the Challenger and Columbia accidents.

789: The number of astronauts and cosmonauts who have returned to Earth on a NASA shuttle. Some spaceflyers actually launched into orbit on Russian Soyuz vehicles and returned home on a shuttle.

355: The actual number of individual astronauts and cosmonauts who have flown on the space shuttle. That breaks down to 306 men and 49 women hailing from 16 different countries.

234: The total number of days space shuttle astronauts spent at the International Space Station between 1998 and 2011, the construction phase of the orbiting laboratory.

180: The total number of satellites and other payloads, including components for the International Space Station, deployed by NASA space shuttles.

135: Total number of NASA space shuttle missions that will have flown between 1981 and 2011. NASA added the prefix of "STS" (Space Transportation System) to each shuttle mission. Of the 135 missions, 133 flights went as planned, with two ending in disaster. [Most Memorable Shuttle Missions]

52: The total number of satellites, space station components and other payloads returned from orbit on NASA shuttle missions.

37: The number of times a NASA shuttle has docked at the International Space Station during the outpost's lifetime.

9: The number of times a NASA shuttle docked at Russia's space station Mir between 1994 and 1998.

8: The largest number of astronauts to fly on a NASA shuttle at one time. It happened at least twice: during the STS-61A shuttle mission in 1985, then again in 1995 during the STS-71 flight's return from the Russian Space Station Mir.

7: The total number of missions by shuttle astronauts to retrieve, repair and then redeploy a satellite in orbit.

5: NASA's final tally for the number of spaceworthy vehicles built for the space shuttle fleet. The shuttles that have launched into space are: Columbia, Challenger, Discovery, Atlantis and Endeavour. Challenger and Columbia were lost during spaceflight tragedies.

Another shuttle prototype, the Enterprise vehicle, only flew in Earth's atmosphere and never launched into orbit.

3: The number of main landing sites for NASA space shuttles at the end of their missions. They are: the Kennedy Space Center in Cape Canaveral, Fla. (primary site), Edwards Air Force Base in California (backup), White Sands Space Harbor in White Sands, New Mexico (backup).

In addition to these three sites, NASA has a long list of airport runways that could be suitable for a shuttle landing in an emergency.

1: The number of NASA's Original Seven Mercury astronauts to fly on a NASA shuttle. In October 1998, Mercury astronaut John Glenn launched on the space shuttle Discovery during the STS-95 mission. At age 77, Glenn (then a U.S. Senator) was the oldest person ever to fly in space. Glenn celebrated his 90th birthday this week during NASA's final shuttle flight.

NASA is retiring the space shuttle fleet to make way for a new exploration program aimed at sending astronauts on deep space missions to an asteroid and, eventually, Mars.

Once the program shuts down, all three space-flown shuttles and a prototype called Enterprise (which never flew in space) will be placed on public display in museums around the country.