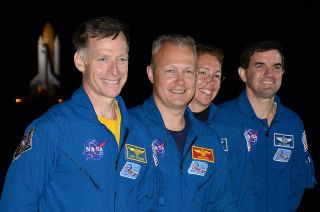 With NASA retiring its space shuttle program after three decades of service, American astronauts will face a gap in spaceflight until commercial vehicles are deemed safe and ready to take spaceflyers to and from the International Space Station and other potential destinations in low-Earth orbit.

But with no space shuttles to fly, and at least several years before the commercial industry gets going, what will happen to NASA's astronaut corps?

Some veteran spaceflyers have parted ways with the agency during this time of transition, while others are finding plenty of reasons to stick around. [NASA's Space Shuttle Program In Pictures: A Tribute]

"There's a lot going on. We're going to continue to man the space station for at least the next decade. We've also got our Orion MPCV crew vehicle that we're working on at NASA … commercial providers eventually working on commercial transportation. Chris [Ferguson] and I would like to contribute where we can," Atlantis pilot Doug Hurley said. Ferguson is commanding the shuttle Atlantis' STS-135 mission – NASA's last-ever shuttle flight.

Atlantis launched July 8 to the International Space Station on a 13-day mission to deliver critical supplies to the orbiting outpost. The orbiter is scheduled to land at the Kennedy Space Center in Florida in the predawn hours on Thursday (July 21). When Atlantis' wheels roll to a stop for the final time, the shuttle program will effectively come to a close.

NASA is retiring its orbiter fleet to focus on deep-space exploration to destinations like an asteroid and Mars. The agency and its partners are already hard at work developing a capsule, called the Multi-Purpose Crew Vehicle (MPCV), which will be used for future exploration missions.

For some astronauts, having the opportunity to be a part of NASA's transition is exciting. And, despite the prospect of having to wait several years before American astronauts are once again launched from U.S. soil, some think there is a great value to remaining with the astronaut corps.

"The decision to retire the shuttle was made a long time ago," astronaut Cady Coleman, who recently completed a long duration stint on the space station, told SPACE.com. "The decision to have this gap in American capability to launch people into space by ourselves was made a long time ago. And now my job as part of the astronaut corps is to live and work in this situation."

NASA will also continue to fly American astronauts to the space station, where they can gain valuable spaceflight and scientific experience. Others are lured by their desire to be a part of exploration missions beyond low-Earth orbit.

"I think it's really based on each individual within the office and what their families desire, where they want to live, and what they want to do after they've decided they've done what they wanted to do at the astronaut office," Hurley said during in-flight interviews. "For me, personally, we've talked about this before. I'd love to stay and help out. We have plenty of flying opportunities aboard [the space station]. From my standpoint, it's a pretty exciting time to be here."

Last week, astronaut Steve Lindsey announced his departure from NASA to pursue a career within the aerospace industry. Lindsey, a retired colonel in the U.S. Air Force and a veteran of five space shuttle missions, including the final flight of Discovery in February, parted ways with the agency on July 15.

"Steve's a consummate leader and has been a great role model within the corps," Peggy Whitson, chief of the Astronaut Office, said in a statement. "His calm demeanor and steady presence has been invaluable to not only his shuttle mission crews but also our office as a whole. I know he will be a great asset to the next team privileged to work with him."

Last month, Mark Kelly, commander of NASA's second-to-last shuttle mission — the STS-134 flight of Endeavour — also announced his retirement from the agency, effective Oct. 1. Kelly stated that his retirement was driven by the desire to spend more time with his family. He will also continue to focus on the recovery of his wife, Arizona Congresswoman Gabrielle Giffords, from a gunshot wound to the head that she sustained in an assassination attempt in early January.

Still, Ferguson said he understands why some astronauts will leave NASA after the space shuttles are grounded for good.

"With regard to attrition, a lot of our office — probably about a third of our office — is former military pilots," he explained. "Pilots like to do what pilots like to do, and that's fly airplanes. I can certainly understand. Everyone has their own personal preferences, and there'll be a lull in piloting opportunities."

Ferguson himself has stated that he has not made immediate plans for his future following the STS-135 mission. In what will be a dynamic period of change, others are taking a wait-and-see approach.

Astronaut Stephen Robinson, a veteran of four shuttle flights, told SPACE.com he started working for NASA before the space shuttle fleet ever launched on its first mission in 1981. He remembers well the gap between the end of the Apollo program in 1975 and the start of the shuttle era. [Video: NASA's First Space Shuttle]

While there are some similarities between then and now, he's excited about NASA's future plans.

"I kind of want to see what the transition is going to be like, you know," Robinson told SPACE.com. "I'm not sure I’m going to be getting my fifth mission when other guys are waiting for their first and second mission."

Robinson served as the lead spacecraft communicator during this final shuttle flight, talking with the crew of Atlantis from NASA's Mission Control center in Houston, and has plenty of other duties on the ground that keep him at NASA.