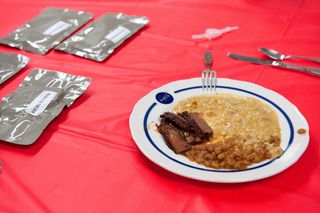 The STS-135 "All-American Meal" unwrapped: the main course shipped to space on shuttle Atlantis in labeled, thermostabilized pouches (left). NASA has invited the public to share the meal with the final shuttle crew on July 14, 2011 in a virtual dinner.
(Image: © NASA/collectSPACE.com)

The four astronauts flying NASA's final space shuttle mission are set to share Thursday a special "All-American Meal," and NASA's invited everyone on the ground to join them.

The special patriotic menu was originally planned to mark the Fourth of July, had space shuttle Atlantis' launch to the International Space Station (ISS) not slipped to July 8. Instead, NASA repackaged it as a commemoration of the end of the 30-year U.S. shuttle program.

"In honor of the last shuttle flight, we're going to have what we call an 'All-American Meal'. Originally, this was planned as a July 4th meal when the flight was going to be going during July 4th," said Vickie Kloeris, NASA food scientist and manager of the space food systems lab at the Johnson Space Center in Houston, Texas.

The meal ends with the quintessential American dessert, apple pie.

The Atlantis and ISS crews both have the meal on their menus, but the station crew has barbecued brisket as the entree.

Some of the items on the All-American Meal menu are exactly the same as anyone can buy at their local grocery — in fact, they are right off the shelf.

The crackers, brie cheese, sausage, and apple pie are commercial off-the-shelf products that were repackaged for spaceflight.

According to the astronauts' published menus on NASA's website, the apple pie was made by Hostess.

"And so that's actually a little more challenging than just cooking something to serve immediately at home because you have to go through a more extensive process to make it shelf-stable," she said.

NASA has published the formulations for the meal's main course to its website and invited the public to share in preparing their own All-American Meal.

"We're offering an opportunity for the public to see some of what the crew is going to be eating on-orbit, so they can eat like the commander ... if they would like to," said Kloeris.

The idea behind the special menu was suggested by one of the astronauts aboard Atlantis' STS-135 mission.

"Sandy Magnus, I believe, was the originator of the idea," Kloeris said. "When shuttles have gone and docked with [the] station, they usually plan some kind of joint meal. And so Sandy, being a member of the 135 crew, she was trying to think of a joint meal to plan and because of July 4th, she came up with the idea for a July 4th meal and that's where this originated."

Magnus has previously been on the receiving end of the special meal, having served as a member of the station's Expedition 18 crew in 2009.

"Having spent [a] long duration on station, she is well aware of the psychological benefit to something special like this on-orbit," Kloeris said.

During her ISS Expedition 18 stay, Magnus became the first to cook in space, remixing NASA's prepared foods together with other spices and ingredients she requested be sent up to the station.

This time, the crew's activities — unpacking the cargo module they launched of a year's worth of supplies for the space station and then repacking it with spent equipment and trash to return home — will likely keep her too busy to augment the All-American Meal with her own creations.

"I am probably not going to have the time to cook," Magnus said in a pre-flight interview with collectSPACE.com. "I'll probably just have time to do little stuff, like just mix prepared food together to get different flavors."