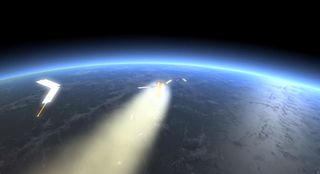 Illustration of the European ATV-2 reentry and breakup because of the atmospheric forces.
(Image: © ESA - D. Ducros)

A huge, unmanned spacecraft met an intentionally fiery demise Tuesday (June 21), but thanks to a special onboard recorder, the cargo ship beamed a steady narration of its final descent to Earth.

The European Automated Transfer Vehicle-2 (ATV-2) plunged into Earth's atmosphere as planned today to end its months-long mission at the International Space Station. The spacecraft broke apart over the southern Pacific Ocean as it burned up in the atmosphere, in what has become a common method for disposing of robotic space station cargo ships

Mission directors at the European Space Agency (ESA) lost contact with the space freighter, named the "Johannes Kepler," at 4:41 p.m. EDT (2041 GMT) at an altitude of about 50 miles (80 kilometers).

"There is nothing more we can do but watch," said ESA’s ATV deputy program head Charlotte Beskow prior to the vehicle's fragmentation in the atmosphere. [Video: ATV-2 Johannes Kepler's Fiery Finale Explained]

The final moments of the ATV-2 Johannes Kepler were expected to be documented by its Re-entry Breakup Recorder, which functions similar to black boxes on aircraft.

The box, which is about 20 pounds (9 kg), automatically began recording data during the last five minutes of the ATV's descent. The recorder collected information on the vehicle's position, attitude, temperature, pressure and other aspects of its breakup during re-entry.

The snub-nose recorder was jettisoned as the Johannes Kepler neared its demise, and was protected by its own heat shield. The recorder was expected to transmit the stored data to mission team members for analysis, from an altitude of 11 miles (18 km), before plunging into the Pacific to meet its own doom.

The information will be used to better understand aspects of controlled destructive entries. Similar recorders may be used on future satellites and spacecraft, ESA officials have said.

The ATV-2 Johannes Kepler spacecraft was named after the famous 17th century German astronomer and was the second robotic cargo ship built by the European Space Agency.  It departed the space station on Monday (June 20) after being packed with trash and unneeded cargo from the space station.

The Johannes Kepler undocked from the orbiting laboratory at 10:46 a.m. EDT (1446 GMT) yesterday. The robotic ship arrived at the space station on Feb. 24 and spent about four months docked at the outpost.

During that time it delivered 7 tons of cargo, including experiments, fuel, water, food and other critical supplies. Space station managers also used the docked spacecraft's thrusters to boost the station into a higher orbit from time to time.

With the Johannes Kepler's departure from the space station, the orbiting lab is now ready to welcome the arrival of a new cargo ship.

The unmanned Russian Progress 43 space freighter launched into orbit today from the central Asian spaceport of Baikonur Cosmodrome in Kazakhstan. It will arrive at the space station on Thursday, June 23.