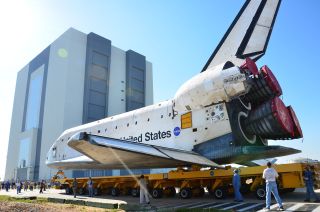 Space shuttle Atlantis rolls over to the 52-story Vehicle Assembly Building at NASA's Kennedy Space Center in Florida on May 17, 2011. Atlantis is slated to fly the last mission of the space shuttle program, STS-135, in July.
(Image: © collectSPACE/Robert Pearlman)

CAPE CANAVERAL, Fla. — Just one day after the shuttle Endeavour launched for the last time, its sister orbiter Atlantis is making one final trip from its processing facility to the giant building where it will be stacked for its very last launch.

Atlantis is scheduled to make its last climb to orbit on the STS-135 mission sometime in July. The shuttle will carry four astronauts and a cargo bay full of spare parts to the International Space Station. [Photos of Space Shuttle Endeavour's Final Launch]

Today's maneuver, called "rollover" in NASA parlance, began at a building called the Orbiter Processing Facility (OPF) here at Kennedy Space Center, where Atlantis has undergone inspections and maintenance since landing after its last voyage, the STS-132 mission, in May 2010.

From there, Atlantis traveled out on a giant 18-wheel transporter platform, where it paused to allow shuttle workers to take photos alongside it. The rollover holds emotional significance for the team of thousands of NASA civil servants and contractors who have worked on Atlantis, many for the whole of its almost 26-year life.

This afternoon Atlantis will roll in to the 52-story tall Vertical Assembly Building (VAB), and there, on Wednesday, it will be lifted and maneuvered into a vertical position to be joined with twin white solid rocket boosters and a giant orange external tank to become a full space shuttle. [Endeavour's Lift-off into History]

With Atlantis' spaceflight, NASA willdraw its 30-year space shuttle program to a close to begin building the next phase in American spaceflight: a vehicle that can take humans beyond low-Earth orbit to an asteroid and Mars. [Photos: Shuttle Endeavour's Final Mission]

After their last missions, NASA's three orbiters will be retired to museums. Atlantis will come back here to the Kennedy Space Center Visitor Complex, while Endeavour will go to the California Science Center in Los Angeles and Discovery will be sent to the Smithsonian National Air and Space Museum's Udvar-Hazy Center outside Washington, D.C.