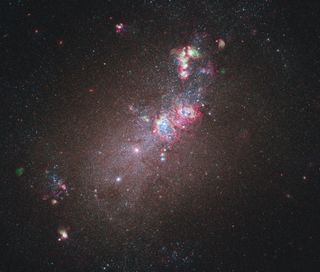 Galaxy NGC 4214 is dominated by a huge glowing cloud of hydrogen gas in which new stars are being born. A heart-shaped hollow — possibly galaxy NGC 4214’s most eye-catching feature — can be seen at the centre of this.
(Image: © NASA, ESA and the Hubble Heritage Team (STScI/AURA)-ESA/Hubble Collaboration. Acknowledgment: R. O’Connell (University of Virginia) and the WFC3 Scientific Oversight Committee)

A new photo by the Hubble Space Telescope has revealed a glowing galaxy packed with young stars and gas clouds, making it an ideal laboratory for astronomers hoping to study star formation and evolution.

A huge heart-shaped cavity — possibly the galaxy's most eye-catching feature — can also be seen at the center of the image. Inside this hole is a large cluster of massive, young stars ranging in temperature from 18,000 to 90,000 degrees Fahrenheit (10,000 to 50,000 degrees Celsius).

It's these strong stellar winds that are responsible for the creation of the large hollow area, researchers explained in a statement. The resulting lack of gas prevents any further star formation from occurring in this region, they added.

NGC 4214 is located about 10 million light-years away in the constellation of Canes Venatici (The Hunting Dogs). The galaxy's relatively close proximity, combined with the wide variety of evolutionary stages of its stars, makes it an ideal laboratory to research what triggers star formation and evolution. [Most Amazing Hubble Discoveries]

Luckily, there is little interstellar dust between our galaxy and the dwarf galaxy NGC 4214, which ensures the accuracy of the measurements.

NGC 4214 contains a large amount of gas, some of which can be seen glowing red in the image. This provides abundant material for star formation.

The area with the most hydrogen gas, in the upper part of the Hubble image, is consequently the location of the youngest cluster of stars (around two million years old). This area is visible due to the ionization of the surrounding gas by ultraviolet light released by a young cluster of stars within.

Other observations of NGC 4214 have revealed clusters of much older red supergiant stars, which are massive stars nearing the end of their lives. Additional older stars can be seen dotted all across the galaxy.

These features are dominant when viewed in infrared, but can only be seen shining faintly in this visible-light image. The variety of stars at different stages in their evolution tell astronomers that the recent and ongoing starburst periods were likely not isolated incidents, and the galaxy's numerous regions of ionized hydrogen suggest that they will not be the last.