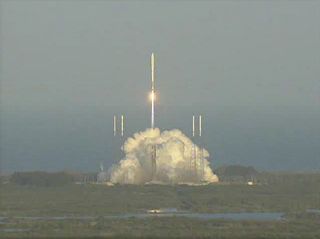 After being delayed a day by bad weather, the U.S. Air Force's second X-37B robotic space plane blasted off from Florida this afternoon (March 5) on a mystery mission shrouded in secrecy.

"Liftoff of the Atlas 5 rocket and the second experimental X-37B, America's miniature military space shuttle," the Air Force Space Command wrote in a Twitter post as the Atlas 5 streaked into the Florida skies.

The space plane was originally scheduled to launch yesterday, but cloudy, windy conditions scrubbed two attempts. And a technical glitch caused the X-37B to miss a launch window earlier this afternoon; a faulty valve had to be replaced in a last-minute repair.

The X-37B's mission is classified, but Air Force officials have said the vehicle will be used to test out new spacecraft technologies. Shortly after launch, the mission went into a scheduled media blackout, with no futher public updates.

The X-37B spacecraft looks a bit like NASA's space shuttles, only much smaller. The vehicle is about 29 feet long by 15 feet wide (8.8 by 4.5 meters), with a payload bay about the size of a pickup truck bed. By comparison, two entire X-37Bs could fit inside the payload bay of a space shuttle.

The space plane, built by Boeing for the U.S. military, can fly long, extended missions because of its solar array power system, which allows it to stay in orbit for up to nine months, Air Force officials have said. [Infographic: The X-37B Space Plane]

What exactly the vehicle does while circling the Earth for so long is a mystery, since the craft's payloads and missions are classified. Partly as a result of the secrecy, some concern has been raised — particularly by Russia and China — that the X-37B is a space weapon of some sort.

But the Air Force has repeatedly denied that charge, claiming that the X-37B's chief task is testing out new hardware for future satellites — instruments like sensors and guidance, control and navigation systems. And that's likely to be the case, experts say.

"It gives the Air Force the ability to test-fly some of this hardware," said Brian Weeden, a former Air Force orbital analyst who works as a technical adviser for the nonprofit Secure World Foundation.

Weeden suspects the X-37B is testing gear for the National Reconnaissance Office, the intelligence agency that builds and operates the U.S.'s spy satellites. That would explain all the secrecy, he said.

Second mission for the X-37B

The Air Force's other X-37B, known as OTV-1, launched last April and returned in December after spending 224 days in space. While its mission was also classified, technology-testing was OTV-1's primary job, too, Air Force officials have said.

While the X-37B is likely trying out new hardware, the vehicle itself is experimental — hence the "X" designation — so these flights should also help the Air Force assess the space plane as well as its payload.

"Part of its mission is to test out reusable technologies and to see how quickly they can turn around these vehicles and launch them again," Weeden said.

Boeing's Space and Intelligence Systems division builds the X-37B for the Air Force. Originally, NASA used the space plane as an experimental test bed until funding for the project ran out in 2004.