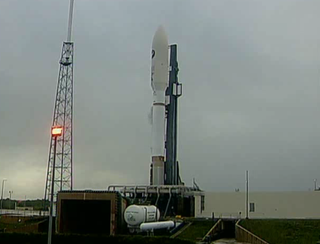 Thick cumulous clouds were within 10 miles (16 kilometers) of the launch complex, presenting an unacceptable risk of lightning, according to officials with the United Launch Alliance (ULA), which is overseeing the OTV-2's launch. [Photos: Flight of the X-37B Space Plane]

"We made a valiant attempt, but the weather is not cooperating for today," a launch controller said.

The foul weather didn't catch mission planners off guard — Air Force officials had said in the days leading up to the launch attempt that there was a 70 percent chance of a delay caused by weather.

The next launch opportunity comes tomorrow (March 5) at 4:09 p.m. EST (2109 GMT), ULA officials said. But the lousy weather could still be a problem, with launch controllers estimating a 70 percent chance of another weather delay.

When it does blast off, OTV-2 will embark on the X-37B's second space mission. The Air Force's other X-37B vehicle, known as OTV-1, launched last April and returned in December after seven mysterious months in space. [Infographic: The X-37B Space Plane]

With its blunt nose and stubby wings, the unmanned X-37B spacecraft resembles a miniature version of NASA's space shuttles.

The X-37B is about 29 feet long and 14 feet wide (8.8 by 4.2 meters), with a payload bay about the size of a pickup truck bed. It is designed to launch vertically inside the nose cone of a rocket, stay in orbit for months at a time, and then land horizontally on a runway like a space shuttle.

The X-37B's cost, payloads and missions are classified. Partly as a result of this secrecy, some concern has been raised—particularly by Russia and China—that the vehicle is a space weapon of some sort.

But Air Force officials have repeatedly denied that charge, claiming that the space plane's main task is to help test out technologies — such as new guidance, control and navigation systems — for future satellites. Some experts think the X-37B is trying out hardware for next-generation spy satellites, which would explain all the secrecy.

Boeing's Space and Intelligence Systems division builds the X-37B for the Air Force. Originally, NASA used the space plane as an experimental test bed until funding for the project ran out in 2004.

The United Launch Alliance will provide live coverage of the next attempt tomorrow. Watch the webcast here.