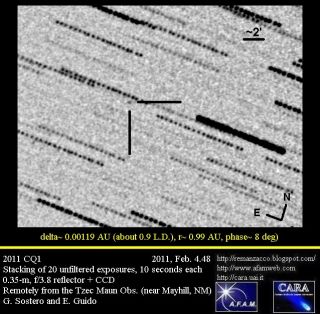 A tiny asteroid passed close by Earth Friday (Feb. 4) but posed no threat of impacting our planet – or even reaching the surface, NASA officials say.

The small asteroid, called 2011 CQ 1, passed within 3,400 miles (5471 km) of Earth at about 2:40 p.m. EST (1940 GMT). The close pass occurred just hours after the asteroid was discovered by astronomer Richard A. Kowalski, according to scientists at Remanzacco Observatory in Italy, who snapped a photo of the asteroid taken soon after it was spotted.

Asteroid 2011 CQ 1 is only 4 feet (1.3 meters) wide, so small that it would have incinerated in Earth's atmosphere before reaching the ground, according to officials with NASA's Asteroid Watch program. The asteroid never threatened to hit Earth, they said.

"Even if it came closer, a rocky asteroid small as 2010 CQ1 would break apart in our atmosphere and cause no ground damage," NASA Asteroid Watch scientists wrote in a Twitter post.

NASA and other astronomers routinely scan the skies to search for asteroids or comets that may be an impact threat to Earth. The Near-Earth Object Observations program at NASA's Jet Propulsion Laboratory in Pasadena, Calif., tracks potentially dangerous asteroids and studies their orbits to determine if they pose a risk of hitting the Earth.

Asteroid 2011 CQ 1, however, is not dangerous or big. It's one of the many asteroids thought to zip close by Earth unnoticed every day, NASA officials said.

"It's predicted that tiny space rocks pass between Earth and moon almost daily but are too small to be detected and pose very little threat," Asteroid Watch scientists wrote.

Astronomers Ernesto Guido and Giovanni Sostero at the Remanzacco Observatory are keeping a close eye on Asteroid 2011 CQ 1. After releasing the initial photo, they also added that skywatcher, Andrew Lowe, deduced the asteroid would cross across the face of the sun – which astronomers call a "transit" – shortly after its close pass by Earth.