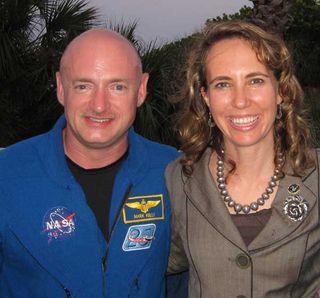 The astronaut husband of Rep. Gabrielle Giffords said today (Jan. 20) he thinks his wife, who is about to be transferred from the hospital to a rehabilitation center, could fully recover from the gunshot that sent a bullet through her brain.

Mark Kelly, a veteran NASA astronaut, has remained by Giffords' side since Jan. 8, when a gunman opened fire at a meet-and-greet event with the Arizona Democrat’s constituents at a supermarket in Tucson, Ariz. Six people were killed and 13 injured.

"I'm extremely hopeful that Gabby is going to make a full recovery," Kelly said during a press conference at the University Medical Center in Tucson. "She is a fighter like nobody else I know."

Giffords has made considerable progress in her recovery and was able to stand, with assistance, yesterday. Kelly said she also has "made some attempts" at speaking. In an interview with ABC, the astronaut added that Giffords gave him a neck rub.

The suspect in the Jan. 8 shooting – Jared Loughner, 22, of Tucson – was indicted by a federal grand jury yesterday in Tucson, and accused of attempting to assassinate Giffords and trying to kill two of her aides, according to the Associated Press. Loughner is scheduled to appear at a preliminary hearing in Phoenix Jan. 24, the Associated Press reported.

Additional charges are likely for the deaths of Gabe Zimmerman, a Giffords aide, and U.S. District Judge John Roll, who were among those killed in the attack, according to media reports.

Kelly said doctors plan to move Giffords to the TIRR Memorial Hermann Hospital in Houston tomorrow to begin the rehabilitation phase of her recovery. As a NASA astronaut, Kelly lives and works in Houston, which is also home to the space agency's Johnson Space Center

By being moved to TIRR Memorial Hermann, Kelly said, Giffords will receive the best rehabilitation care and he will be able to remain by her side throughout the process.

Kelly said the move also "makes the most sense" since it will allow him the chance to "at some point consider the possibility of returning to work."

"The congresswoman's family wants to ensure she receives the best rehabilitative care possible for her type of serious penetrating brain injury," said Dr. Michael Lemole, one of Giffords' neurosurgeons at University Medical Center, in a statement. "As a result, they considered facilities around the country, including rehabilitation hospitals in Washington, D.C., New York, Chicago and Houston."

Giffords' doctors said that while she has made progress, there is a long road ahead toward recovery.

Meanwhile, Kelly is assigned to command NASA's last scheduled space shuttle mission. That spaceflight, the STS-134 mission aboard the shuttle Endeavour, is slated to launch April 19 to deliver a billion-dollar astrophysics experiment to the International Space Station.

NASA has named a backup commander – veteran astronaut Rick Sturckow – to lead Endeavour's flight should Kelly be unable to continue with the mission. Kelly has said he is hopeful he will be able to rejoin his crew and finish training for the spaceflight.

Kelly has flown on three space shuttle missions, the most recent one in 2008. He has an identical twin – Scott Kelly – who is also an astronaut and is currently serving as commander of the International Space Station. The twin astronaut brothers are also both captains in the Navy.

"Every time I talk to my brother, it seems like she's making really small steps, which, I think with this type of injury, is really critical," Scott Kelly told ABC affiliate KTRK Houston Jan. 18. "We're all optimistic about her outcome."

During today's press conference, Mark Kelly said he and his family have been amazed by the support from the public.

"I think all Americans are very proud at what they've seen, and I know my wife Gabrielle would be proud of how they've responded to this situation," Kelly said. "The love and support is a bit overwhelming."

One of the first things Giffords will want to do after her rehabilitation is write thank you notes, Kelly said.

"I think she's made a remarkable recovery at this point," he added.