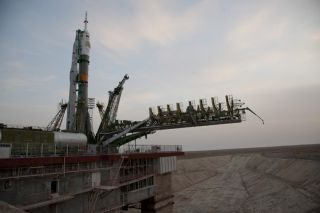 Several days before launch, Nespolishared details about hisSoyuzvehicle on Twitter, where he posts updates under the name@Astro_Paolo.

"The Soyuz: small but reliable. 8min30sec to Low Earthorbit & 48 hrs to catch-up with the ISS!" Nespoli wrote.

Coleman, Kondratyev and Nespoli arebeginning a roughly 5 1/2-monthmission at the space station, where they will conduct scientificresearch and spacestation maintenance. Kondratyev is also expected to perform at leastonespacewalk.

The Soyuz TMA-20 spaceflyers willmake up the remainder of thestation's Expedition 26 crew when they join the three astronautsalready livingonboard the orbiting outpost. Station commander ScottKelly of NASA and flight engineers Alexander Kaleri and OlegSkripochka ofRussia have been living at the station since early October.

Today's spaceflight is the third forColeman, the second forNespoli, and the first for Kondratyev.

"This is my first flight and I needto learn from myfriends everything on the station and get ready to be a commander forthesecond time, for second part of the mission, so that's quitechallenging forme, but I have support from all of my crew members so they understandand I thinkthere won't be any problems," Kondratyev said in a preflight interview.

Over the course of their mission,Coleman, Kondratyev andNespoli will oversee the arrival of two unmanned cargo supply ships ?one fromEurope and the other from Japan. They will also host two final spaceshuttlemissions before their retirement ? Discovery'sSTS-133, which is scheduled for early February, andEndeavour's STS-134,which is expected to fly in April.

Throughout their time on the spacestation, Coleman,Kondratyev and Nespoli will also be engaged in educational outreach.

Nespoli will be conducting tests on aspecial greenhousethat he is bringing to the orbiting laboratory. Students all over theworld areinvited to follow the progress of the experiment.

"We'll do observations of the plantto figure out howit grows in space and on the ground," Nespoli told SPACE.com in apreflight interview. "It lets the kids see that even with simplethings,they can approach them with a scientific mentality and start thinkingin thatdirection. This is a great program that helps let people know that wecan usethe station in a lot of good ways."

And in their spare time, thespaceflyers are hoping to savorthe experience of living on the space station.

"I'm excited about trying to somehowconvey theexperience of living in space back home," Coleman said in a preflightinterview. "I'm also going to bring my flute. I'll bring music that Icanlisten to and play at the same time. I'll also be blogging, videoblogging andtaking pictures. And I can't wait to look out the window."