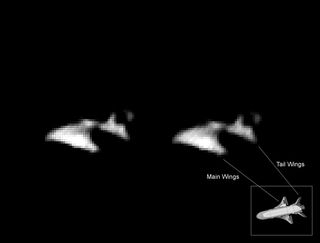 Skywatcher and satellite tracker, Ralf Vandebergh of the Neterhlands, has released a new image of an over flight of the U.S. Air Force secretive X-37B space plane, also known as Orbital Test Vehicle-5.
(Image: © Ralf Vanderbergh)

The secretive mission of the U.S. Air Force X-37B space plane has winged past 670 days of flight – just 48 days shy from setting a long duration record for the program.

This Orbital Test Vehicle 5 mission (OTV-5) rocketed into Earth orbit on Sept. 7, 2017 atop a SpaceX Falcon 9 booster from Launch Complex 39A at NASA’s Kennedy Space Center in Florida.

Exactly when the OTV-5 space plane will land is unknown.

The last Air Force's X-37B mission, OTV-4 — after 718 days of flight — touched down at NASA’s Kennedy Space Center Shuttle Landing Facility May 7, 2017 — a first for the program. All prior missions had ended with a tarmac touchdown at Vandenberg Air Force Base in California.

Prior to launch of OTV-5, Randy Walden, the director of the Air Force Rapid Capabilities Office said there were many firsts on this mission, making it a milestone for the program. "It is our goal to continue advancing the X-37B OTV so it can more fully support the growing space community," he said.

The Air Force also noted that the fifth OTV mission was launched into, and will be landed from, a higher inclination orbit than prior missions to further expand the X-37B's orbital envelope.